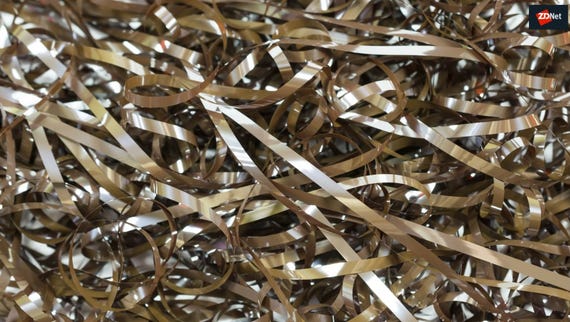 Tape techology is not done: IBM stores 330TB of data on a palm-sized cartridge
Watch Now

Cloud archiving services such as Amazon's Glacier and Google's Nearline and Coldline storage have displaced tape for some long-term archival needs, but a tape-storage breakthrough by IBM scientists may keep tape relevant for a while longer.

IBM Research researchers have set a new record of 201 gigabits per square inch of data stored on a Sony prototype of "sputtered magnetic tape".

​Small business servers: Why and how you can say 'no' to the cloud Even in this cloud-centric world, there remain good reasons to own and run a physical server out of your office (or even home). Which server? That depends entirely on what you'll be using it for.

The tape is enhanced by painting on several thin layers of barium ferrite liquid metal using a process similar to one used in the production of integrated circuits. It used the same metal without the sputtering process to store 123 gigabits per square inch on tape in 2015.

Now, IBM says the method allows it to record up to 330TB of uncompressed data on a standard palm-sized tape cartridge.

The new record volume is equivalent to about 330 million books and sets the path for IBM and other magnetic-tape vendors to continue doubling tape capacity about every two years.

Tape remains cheaper than disk and for this reason is used to store massive video archives and vast troves of records that enterprises, say, in health and finance, are obliged to keep for compliance.

However, Google and Amazon are going after the archival market with the promise that the cloud offers faster access to data, easier management than tape libraries, lower management overheads, and less uncertainty over format support.

The LTO Consortium releases a new LTO format roughly every couple of years, usually with backwards compatibility for the previous generation.

IBM and fellow LTO consortium members HP and Quantum in 2014 released a new roadmap extending LTO technology to LTO 10 with an expected compressed capacity of 120TB per cartridge. The current LTO-7 cartridges have a capacity of 15TB compressed data.

IBM, one of the world's largest enterprise tape vendors, says this sputtered tape technology will ensure customers can continue to rely on cheap tape for the next decade.

"This really demonstrates the potential to continue scaling tape technology, basically at historical rates of doubling the capacity every two years, at least for the next 10 years," said IBM Research's Dr Mark Lantz.

"While sputtered tape is expected to cost a little more to manufacture than current commercial tape that uses barium ferrite, the potential for very high capacity will make the cost per TB very attractive, making this technology practical for cold storage in the cloud," said IBM Fellow Evangelos Eleftheriou.