Huawei's smartphone market share continues to grow. Its new Ascend Mate 7 with a 6-inch display has the power to challenge other flagship devices.

The Ascend Mate 2  made me a believer in Huawei's devices. The Mate 7 impresses me even more because it's a phone that's all display. It has an 83 percent screen-to-body ratio, which beats the Samsung Galaxy Note 4, Galaxy S5, HTC One M8, iPhone 5S, and more. 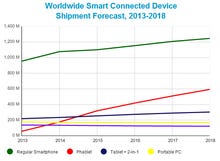 Phablets, 2-in-1 devices to show most growth over five years

IDC is calling for a phablet fiesta in the years ahead with a five-year compound annual growth rate of 60 percent.

In addition to the large 1920 x 1080 pixel resolution display and minimal bezel, Huawei is including a fingerprint scanner on the back.

Unlike the failed HTC One Max scanner, this one just requires a touch to activate rather than a swipe. You will also find a 13 megapixel camera on the back.

Other interesting features include active noise-canceling headphones powered by the phone (the Sony Xperia Z3 has this too), an 8-megapixel front-facing camera (there's an interesting panorama front-facing feature on the Mate 2 as well), Octa core chipset that has two quad-cores which spin up when needed, and a tunable antenna.

The device also lands with a massive 4,000 mAh battery that should power the large display for a couple days.