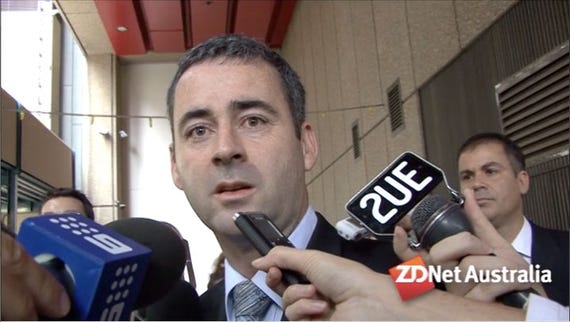 Fresh from victory, iiNet CEO Michael Malone spoke in a doorstop in front of the Federal Court about his win against the Australian Federation Against Copyright Theft.

The federation, which represents film and television studios, first dragged iiNet (and its chief executive Michael Malone) into the Federal Court back in November 2008, arguing that the ISP infringed copyright by failing to take reasonable steps — including enforcing its own terms and conditions — to prevent customers copying films and TV shows over its network.

However, Justice Cowdroy ruled for iiNet today, saying he found that iiNet did not authorise the infringement of the studios' copyright.

The case has ramifications not only for other ISPs' stance on policing copyrighted materials, but also on their duties in other areas such as cutting off virus-infected computers from the internet.

A timeline pinpointing key dates in the iiNet trial can be found on the ZDNet.com.au website.

How do you think the trial went, Michael?

We are delighted with the result, obviously, but largely just relieved that it's over now. I think we shall welcome the outcome. We've said from the very beginning that we didn't believe we ever authorised copyright. I guess the most important thing is now we'd like to engage with all those movie studios and their right holders and see if we can find a way to get this stuff legitimately online.

What does this mean for ISPs around the world?

I think it sets a precedent for ISPs around the world, but of course it's jurisdictional. All of this stuff relates to the Australian law. So at least in the Australian context Justice Cowdroy is saying that ISPs in Australia don't have a positive obligation to stop copyright. That said, I think the best way for us to all stop the copyright violations — it doesn't help iiNet either — the best way to stop it is to make the material legitimately available to customers. So I guess the most important thing for us right now is to engage with those studios and see if we can get that stuff online.

It was quite a clear win though. You must be pleased?

It's on one of the most important facts — authorisation — so I guess, yes, it's a clear thing that iiNet did not authorise. iiNet at no point acted improperly.

Was there anything in the decision you were unhappy with?

How could I be unhappy with a win? We're very happy with this; it's great.

Was it unreasonable for the film studios to expect ISPs to become their gate keepers, their enforcers?

As Justice Cowdroy said, the studios are facing a big problem. There are customers out there around the world, not just in Australia, that are downloading material illegally. So I think it's not unreasonable for them to seek ways to be able to stop that. I guess our view has been though this isn't the proper way to do it. The best way is to make the material legitimately available.

Let's get on the Freezone, Michael?

Yes, exactly. Let's try and get it out there where customers can access it.

So what does this mean for customers [inaudible]?

I don't think anyone should think this is a licence to continue to breach copyright. It's made a decision that iiNet is not responsible for stopping it; it certainly doesn't mean the customers are off the hook either. The studios still have access to be able to go directly after customers as they have in the US, but we still think that litigation is not the best result here. The US experience has shown that if you make the material available, customers take the legitimate path.

Will this change the way you operate?

No, I don't think it changes the status quo at the moment. What it says is that this pathway to stop copyright violation hasn't been successful. But it still means that there's a problem out there that needs to be solved.

Will it actually make a difference, this decision?

All it does, I think, is say this isn't the right way. So I think we really wasted a year now. And what we should do now is find ways to be able to get the material [legitimately] out there instead.

So what will you do with your customers who continue to infringe copyright?

As we have until now, we will be saying ... that the best way to be able to deal with this is to get the material legitimately online.

So you will continue to pass on alleged infringements to police?

We only did that for the first two when AFACT sent them across. We asked AFACT for what they'd like us to do with them in the future but we haven't been doing it since.

So you will be having negations with them no doubt?

Yes, we'll be trying to engage with all the litigants and other rights holders as fast as possible.

[What were your] court costs?

When you acquired Westnet they had a policy of alerting people who infringed copyright [inaudible] why did you not take on that policy?

Westnet never received any notices from AFACT at all.

They had a policy of if anybody had breached copyright they would...

That's not correct. So Westnet never received any notices from AFACT. They had in some cases passed on notices from the US studios that came via their operations centre.

And that was their policy. But when you acquired Westnet you asked them to change that?

We asked, as with all policies, that iiNet and Westnet fall in line with the similar policies of each other.

I didn't call it objectionable.

You did, it's in an email you sent to one of your employees.

That term is not correct.