Congratulations, Theresa May! The internet hates you.

The British cabinet secretary in charge of home affairs, policing, and counter-terrorism received a gong, part of the annual UK Internet Industry Awards, for "forging ahead with communications data legislation that would significantly increase capabilities without adequate consultation with industry and civil society."

Privacy International, a civil liberties group, picked up the award on her behalf. 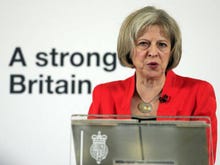 Privacy set to be biggest casualty of UK election, as "snoopers' charter" returns Just hours after Conservative's re-election, the UK government pledged to bolster its surveillance efforts. Third time lucky, this time it might actually go through.

The home secretary, who unshackled from her Liberal Democrat coalition partners following a surprise majority victory earlier this year, is pushing ahead with a rapid expansion of the UK's investigatory and law enforcement powers. The so-called "snoopers' charter" would allow police and intelligence agencies to grab British phone and email records to prevent terrorism. But the bill has been pushed through parliament with almost no consultation with phone and internet providers who will be affected the most.

Though it's far from the best news in the world for the UK cabinet secretary, she managed to piss off the internet and win an award for it -- which, is more than what most of us can say.

If you thought by sheer fact her presence as a politician was enough to turn a nose up to, two bipartisan politicians were jointly named "internet heroes" for their legal action against the data retention and expanded intelligence gathering law.

David Davis MP and Tom Watson MP were honored as some of the "best informed politicians" on internet and privacy matters. The two Commons' members have launched legal action against the UK government for rushing a portion of the bill through parliament last year as emergency legislation.

The "snoopers' charter" bill is due before parliament in the coming months, though no specific date has been set.