By Zack Whittaker for Between the Lines | November 20, 2014 | Topic: Enterprise Software

Intuit's first quarter earnings weren't anything to shout home about. But what do you expect when it dines out on just half the year's worth of North America's tax returns? 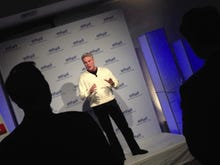 The tax and accounting software company reported on Thursday fiscal first-quarter earnings of 29 cents per share (statement). On a non-GAAP basis, Intuit reported a loss of 10 cents per share on revenue of $672 million, up 8 percent year-over-year.

Wall Street was expecting a loss of 20 cents per share on revenue of $620.8 million.

At the end of the quarter, Intuit had $1.6 billion of cash and investments.

Intuit chief executive Brad Smith said in prepared remarks that the company entered the new year "on a strong note," thanks in part to growth in the company's QuickBooks Online subscribers.

He added: "We're also gearing up for tax season and are looking forward to our lineup of innovative solutions coming to market. While it is early in our fiscal year, I'm energized by our results as we continue to drive momentum in our online ecosystems."

For Intuit's fiscal second quarter outlook, it's expecting revenue between $780 million to $800 million, with a non-GAAP loss of around 11 cents to 13 cents per share.

Wall Street was expecting a loss of 11 cents per share on revenue of $767.5 million.

Shares in Intuit ($INTU) on the Nasdaq in New York closed down 0.7 percent to $90.73. The company was up in after-hours trading.

By Zack Whittaker for Between the Lines | November 20, 2014 | Topic: Enterprise Software