Perhaps fittingly, for something that needs to be very, very simple to use, mobile payments have proved very, very hard to get right.

The last few years have seen countless 'alliances' between banks, credit card companies, phone makers and mobile networks, all trying to make pay-by-smartphone a reality. And every one of these attempts has been met — at best — with a shrug from consumers. 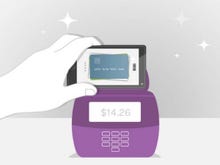 The main reason for that is that cash and credit cards are remarkably good at what they do: enabling fast, easy, reliable, universally available transactions with no additional costs at the point of use.

In contrast, paying for goods at physical retailers has been slow, complicated, and only possible at a very limited number of retailers — assuming you have a device with compatible hardware and operating system in the first place.

One of the common mobile payments technologies is near field communications (NFC) and while it's been around a while, adoption has been limited: last year Gartner substantially cut its global forecast for the volume of NFC transactions over the coming years, because of lower than expected take-up of contactless tech and the failure of high profile wallet projects to break into the mainstream.

(It's worth noting there are plenty of other mobile payments systems — for example for making payments between individuals, that are successful; the ones that don't seem to have made much breakthough are the contactless ones.)

However, according to reports, Apple has signed deals with Mastercard, Visa and American Express for some kind of payments system. It is also reportedly working with Dutch chipmaker NXP Semiconductors to include pay-by-touch technology within the next iPhone.

If Apple is really getting ready to have a go at mobile payments, the real question we need to be asking is: what's changed?

Perhaps one factor is that the timing for such a tie-up may finally be right. The tipping point for mobile payments is on its way, disguised as a rather dull upgrade coming to cash registers near you soon.

Chip and PIN technology for credit cards is finally arriving in the US (the UK has had it since 2003 and France since 1993). Many retailers will be upgrading their credit card readers as a result, and the newer models can often process NFC payments too. That means the US market will at a stroke open up to mobile payments.

Still, substantial obstacles remain to mass market adoption. The companies involved have their own motives for dragging their heels. For retailers it's about cutting costs, for example, while banks and credit cards companies don't want to lose the transaction fees which phone makers and operators are eyeing greedily.

If Apple is working on mobile payments now, its timing is good. And if it can explain to consumers why they should care, it could be on to a winner.