IT must patch against Total Meltdown now: The source code is on GitHub 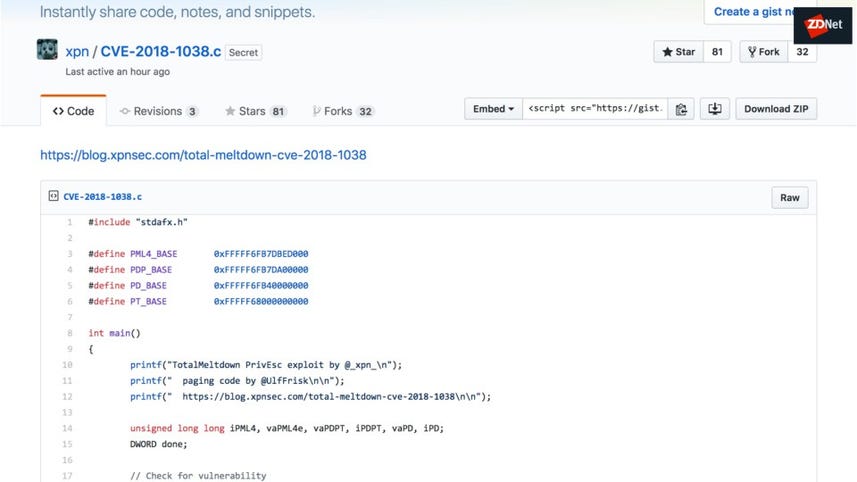 The source code for Total Meltdown, a vulnerability created when Microsoft tried to patch the initial Meltdown flaw, is now available on GitHub.

A person known as XPN, whose blog lists them as a hacker and infosec researcher, posted detailsof a working exploit that takes advantage of Total Meltdown on Monday. In addition to that blog post, the source code for the exploit is now on GitHub, too.

In the blog post, XPN describes Total Meltdown as a "pretty awesome" vulnerability in that it allows "any process to access and modify page table entries." XPN also noted that the goal was to create an exploit that could "elevate privileges during an assessment," but it was only to help other people understand the exploitation technique, not to create a read-to-use attack.

If you're worried about XPN's exploit, or any issues with Total Meltdown, it should be noted that it only affects 64-bit versions of Win7 and Server 2008 R2. As noted by the Woody on Windows column in Computerworld, the following patches introduced Total Meltdown:

To protect against the XPN exploit, the blog noted that Microsoft's patch for CVE-2018-1038 can be found here.

However, to tell if you're protected from Total Meltdown, you'll have to check your patch history. If you have no patches from 2018, you should be good, according to Woody on Windows. But if you do have patches, and have KB 4100480, 4093108, or 4093118 installed, you should also be protected. Without those, Woody on Windows noted, you'll need to rollback your machine, manually install KB 4093108, or use "Windows Update to install all of the checked April Windows patches."

At the time of this writing there were no exploits for Total Meltdown in the wild. However, with the code so easy to find, that might all change very soon.