Full Bio
Posted in Between the Lines on February 4, 2019 | Topic: Smart Office 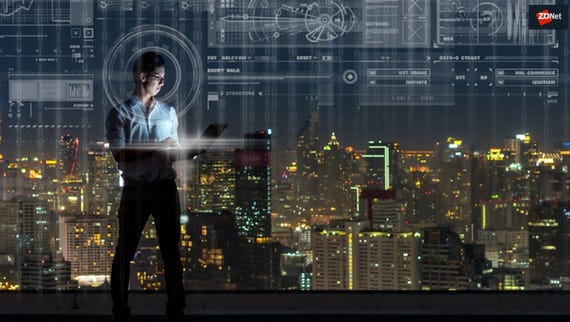 Logitech is launching a device called Logitech Tap, a touch display that aims to take up less space and integrate with collaboration platforms from Google, Microsoft and Zoom.

The Tap represents another phase of smart office collaboration tools. Logitech was a Microsoft partner for Skype Room Systems, which are now called Microsoft Team Rooms, and has refined its approach.

In a nutshell, Tap aims to address the following:

Joan Vandermate, head of marketing. Logitech Tap, said Tap is designed to "solve the UI problem in conference room" by saving space and solving charging, cable and startup issues. "Tap sits on the table and can slide around and start the meeting via motion sensor when the screen lights up," she said. Lenovo as part of its smart office push is also hoping to make connecting to video and conference calls easier.

The $999 price is notable, but Logitech isn't likely to sell Tap solo. Tap is likely to be part of a broader package of systems sold with Google Hangouts Meet Hardware, Microsoft Team Rooms and Zoom Rooms. Resellers of those aforementioned systems are going to add Tap to video cameras and speaker systems for collaboration rooms.

Tap aims to start meetings with one-touch with an interface and control system that can be customized by corporate IT departments. Typically, Tap will come with a small form factor computer, optimized video conferencing software from Google, Microsoft or Zoom and a Logitech camera.

According to Logitech, Tap will be available in the Spring as part of pre-configured room systems from Google, Microsoft and Zoom. Other collaboration platforms are pending, said Vandermate.

The one potential issue with the Tap is that it will be sold as part of a bundle optimized to a particular vendor. The IT department can integrate tap for multiple collaboration platforms, but initially Tap is locked down to a standardized tool.

"This first launch is focused on a locked down system with vendors, but Tap could switch to any other vendor. The compute is elsewhere," said Vandermate. She explained that many companies have one preferred platform that is used for internal communications. Those enterprises wouldn't sweat the lack of initial versatility.

However, other workers get invites for meetings on WebEx, Google, LogMeIn's GoToMeeting and a wide range of platforms. "The bad news is that you can't join one of those meetings on a room system running as a kiosk for Google, Microsoft or Zoom," said Vandermate. "We're not solving that problem, but IT could reimage the system and source its own compute."

Join Discussion for: Logitech launches Tap, aims to solve the...