Microsoft has fired a formidable salvo against Apple and its outdated hardware lineup with a new Surface Book and Surface Studio All-in-One PC.
Written by Adrian Kingsley-Hughes, Contributor on Oct. 26, 2016

If you were in any doubt that Microsoft was serious about high-end PC hardware, then what it unveiled at its October 26 event should dispel any lingering uncertainties.

Microsoft is going after the high-end, and it's going after it in a big way with some impressive hardware designed specifically for Windows 10.

First up was an updated Surface Book that pulls out all the stops. With the starting spec of a sixth-gen (Skylake, not Kaby Lake) Intel Core i7 processor, Nvidia GeForce GTX 965M GPU with 2GB of GDDR5 memory capable of pushing out 1.9 teraflops of graphics performance (double the graphics performance compared to the existing Surface Book), 8GB of RAM and a 256GB SSD, even the base model is a beast.

There's also a new and improved cooling system and a battery that's rated for 16 hours, which is 30 percent more than the existing Surface Book. The best battery life that an Apple laptop can currently achieve is around 12 hours.

But high-end hardware comes with a high-end price tag, and the base i7 Surface Book comes in at a cool $2,399.

Breaking with Apple's "thinner and lighter" mantra, the upgraded Surface Book is slightly heavier than the current configuration, tipping the scales at 3.63lbs, compared to 3.48lbs for its predecessor.

The new Surface Book will be available from November 10, but it is available for pre-order today from the Microsoft Store.

But the real show-stopper is Microsoft's all-new All-in-One PC, the Surface Studio.

Built around the "world's thinnest" 28-inch, 4500 x 3000 pixel, 10-point multi-touch expanded color output display which can pump out 13.5 million pixels (63 percent more than a 4K television), the Surface Studio features a special "zero gravity" chrome hinge that allows for the display to be adjusted to a near-flat orientation for drawing or use with the included Surface Pen.

The base model features a sixth-gen (again, Skylake, not Kaby Lake) quad-core Intel Core i5 processor, 8GB of RAM, Nvidia GeForce GTX 965M GPU with 2GB of GDDR5 memory, and a 1TB hybrid drive, and this comes in at $2,999.

The Surface Studio comes with a full complement of ports, including four USB 3.0 ports, an SD card slot, a mini DisplayPort, and a 3.5mm headphone jack. It also features a 5-megapixel front camera, dual microphones, and a TPM chip for enterprise security.

On the accessories front, the Surface Studio ships with a Surface Keyboard, Surface Mouse, and Surface Pen. There's also a new complementary peripheral called a "Surface Dial," which looks like a mouse wheel and is aimed at graphic designers and those using a pen.

The new Surface Studio will be available from December 15, but it is available for pre-order today from the Microsoft Store. 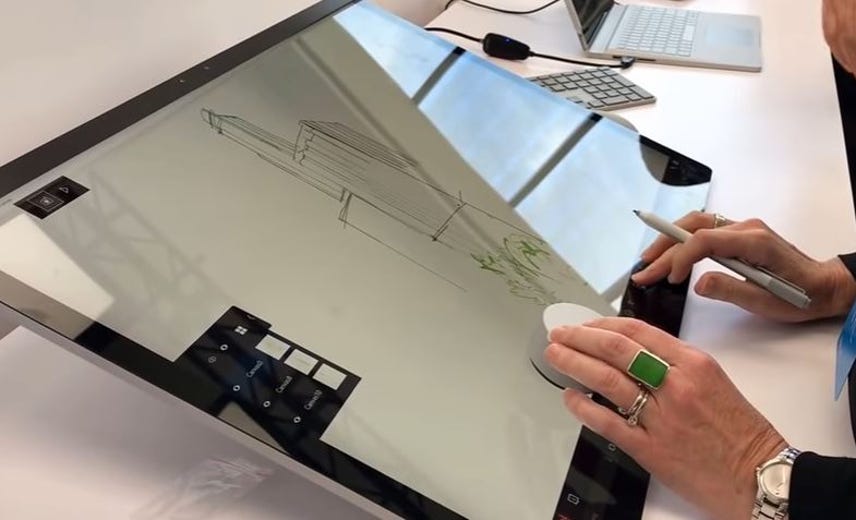