If you own a Volkswagen with keyless entry, it's likely to be vulnerable to a remote-cloning attack, according to new research.

After reverse-engineering the keyless entry systems of multiple VW models dating from the early 2000s to 2016, a team of researchers believe that the vast majority of the 100 million vehicles from VW Group sold in that time are vulnerable to a key-cloning attack that leaves the ignition and keyless entry system exposed to tampering. 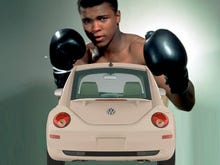 If VW values its customers, it needs to be a challenger not a champ

The company needs to regain its challenger mindset and think very seriously about customer retention in the wake of its unprecedented $15bn settlement with the federal government and US diesel owners.

The attack can be carried out using cheap, battery-run, commercially-available radios, which are capable of eavesdropping and recording the rolling codes used by keyless entry systems and then emulating a key. One of the tools they developed for the attack, an Aduino-based RF transceiver, cost just $40 to make.

Researchers from the University of Birmingham in the UK and German embedded-security consultancy Kasper & Oswald will present their research this week at the Usenix security conference in Austin, Texas.

They note in the paper that Volkswagen Group has relied on only a few cryptographic global master keys for the RKE systems in vehicles sold during the past two decades.

"With the knowledge of these keys, an adversary only has to eavesdrop a single signal from a target remote control. Afterwards, he can decrypt this signal, obtain the current UID and counter value, and create a clone of the original remote control to lock or unlock any door of the target vehicle an arbitrary number of times," they write.

The researchers discovered master keys by reverse-engineering the firmware of electronic control units (ECUs) used onboard vehicles in the study. The attack exploits weaknesses in the key distribution method.

There isn't much car owners or Volkswagen can immediately do to fix the vulnerability because patching or replacing ECUs and the key fobs would be a gargantuan undertaking.

What it does mean for car owners is that checking a system for tampering by listening for sound or watching for blinking indicators isn't valid anymore, since a new valid code can be generated any time after the initial signal is eavesdropped, which can be done from up to 100m away.

Since car owners can't practically block an attacker eavesdropping RF signals, "the only remaining (yet impractical) countermeasure is to fully deactivate or at least not use the [remote keyless entry] functionality and resort to the mechanical lock of the vehicle."

The researchers found Hitag2 keyless entry system used a cryptographically weak cipher. As noted by Wired however, NXP, the semiconductor maker behind the Hitag2 scheme, has been advising manufacturers to upgrade to a modern scheme.

The researchers said they advised VW Group of the vulnerabilities and came to an agreement with the company not to disclose the cryptographic keys, part numbers of vulnerable ECUs, and how they reverse-engineered the processes.

The researchers argue that, given their findings, insurance companies may need to accept that cases that look like insurance fraud, such as a laptop stolen from a locked car without any physical traces of a break-in, can plausibly be an actual theft.

A VW Group spokesman later told ZDNet the security of its systems are up to scratch and that the researchers' work went beyond flaws that are easy to exploit.

"The bar for theft prevention is constantly being raised, but ultimately there is no 100% guarantee for security. On one hand, criminals are equipped with sophisticated tools, and on the other hand, theft protection is impacted by the fact that we have to provide access to the OBD interface (On-Board Diagnosis) as well as the processes and documents in connection to these systems. With highly specialized technical knowledge, individual electronic components of the vehicles can be manipulated though this open interface.

Researchers from the university of Birmingham set themselves the task of analyzing security technologies such as the immobilizer and remote control to identify systematic weaknesses, regardless of practical applicability. Their academic work that has now been published showed that the security systems of the vehicles that were up to 15 years old do not have the same security level as, for example, our present vehicles based on the MQB Modular Transverse Matrix (e.g. the current Golf, Tiguan, Touran, Passat, etc.). These current vehicle generations are not affected by the problem described.

The responsible department at Volkswagen Group is in contact with the academics mentioned and a constructive exchange is taking place. We agreed that the authors would publish their mathematical-scientific findings, but without the sensitive content that could be used by accomplished criminals to break into vehicles. The findings obtained will serve to further improve the security technology."

A VW Group spokesperson said the company won't be commenting on further details yet.