The APIs that RIM is opening up for the BlackBerry platform leapfrog what’s available on other mobile platforms, with free push updates, unified advertising and payment options and not just the standard ‘where you are’ geolocation but the innovative ‘when will you get where you’re going’ option.
Written by First Take , Previews blog log-in on Nov. 11, 2009

The APIs that RIM is opening up for the BlackBerry platform leapfrog what’s available on other mobile platforms, with free push updates, unified advertising and payment options and not just the standard ‘where you are’ geolocation but the innovative ‘when will you get where you’re going’ option. The other thing RIM is doing to attract developers is offering deep integration with the standard BlackBerry apps like the inbox, the calendar and BlackBerry Maps and two of the first apps to take advantage of that will both offer social network tools appealing to BlackBerry’s core business users – Xobni and LinkedIn.

I had a chance to take a closer look at the apps after they were demoed in the keynote at the BlackBerry Developer Conference this week. Both have been in development for some time, both have been much requested by users – and the new integration options and new development tools are key for getting them to market.

The LinkedIn BlackBerry app will be available at the end of the year. Like the existing iPhone LinkedIn app it lets you browse your contacts or search for profiles of people you could connect to by keyword, which is apparently a third of all activity on the LinkedIn site; but it’s the first mobile app with the ‘People you may know’ feature from LinkedIn site which suggests possible connections for you to make with an eerie degree of accuracy. 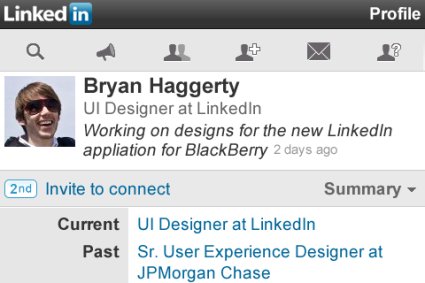 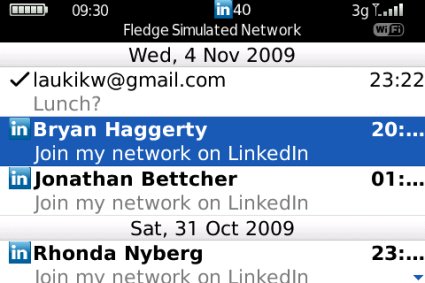 That’s convenient but it’s not that different from getting invitations sent to you as normal email apart from the fact that accepting them opens the LinkedIn app rather than the usual LinkedIn Web site, which is both quicker and more efficient to work with.

Much more useful is the integration with the Calendar and Contacts apps. When you have a meeting invitation, you’ll be able to look up the other attendees on LinkedIn by clicking on their email addresses and opening their profiles. LinkedIn vice president Adam Nash told me it’s common for people to check each other out on LinkedIn before a business meeting and this makes it even more convenient. In the future he’s hoping to bring the ‘In common’ results from LinkedIn search, showing the connections and groups you share with people, to the BlackBerry app; “it’s all about how do you start that conversation?” he said. The more you know about someone before you meet them and who you know in common, the easier it is to deal with them and putting those tools right into your calendar and address book makes it easier to remember to use them; that’s a really good match to the typical business BlackBerry user.

Xobni is also about staying in touch with people. Like the existing Xobni Outlook plugin in, the BlackBerry app (due as an alpha in December and shipping early next year, initially for the Bold, Curve and Tour handsets) will search through your email to find the people you’re in contact with. Unless you’re very diligent, most of them aren’t in your address book, so you have to look for a recent message from someone before you can mail them again (or remember where you put the business card). And just adding everyone you’re in touch with to your address book leaves you with a lot of names to scroll through – the Simon I email the most isn’t the email address that comes up first when I type Simon into my BlackBerry (or my Windows Mobile phone).

Install the Xobni app and you can choose to pick contacts from Xobni rather than the BlackBerry contacts list by scrolling up with the BlackBerry trackball or trackpad. Xobni remembers everyone who has emailed you, or been cc’d on a message or even been mentioned in a message – and the store is very compressed, Xobni CEO Jeff Bonforte told me, so thousands of contacts can be stored in very little space, not just the usual last 30 days of mail. You can search by name, domain name or keyword and the list you get is ordered not alphabetically but by ‘Xobni Rank’ – how recently or frequently you’ve exchanged messages with them. 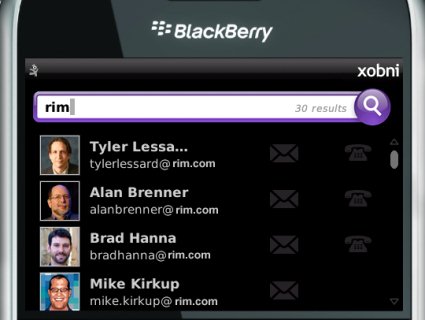 Xobni extracts phone and fax numbers as well as names and email addresses, and connects to Facebook and LinkedIn for any extra contact information it can get, including a photo - and it integrates with the BlackBerry apps so you can also phone or text a Xobni contact. 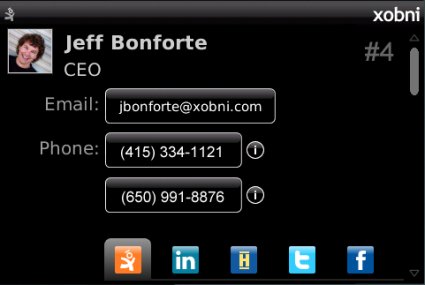 Bonforte claims Xobni uses information like the email address, time stamp and headers, and maybe even your calendar, to detect which country ambiguous phone numbers should be allocated to. If the number doesn’t look quite right, you can see the original message that Xobni derived the number from to check.

If you’re emailing about arranging a meeting, Xobni can attach a list of the next few times when you’re free; another excellent use of BlackBerry integration. Bonforte is also planning calendar integration similar to LinkedIn, to give you information about who you’re meeting with, but based on email exchanges you’ve had with people connected to them.

As with LinkedIn, Xobni is an excellent match to the BlackBerry demographic; in fact the reason the company is working on a BlackBerry app is that it found half of its users have BlackBerrys, and the expectation is that they’ll be ready to pay for these features.

The LinkedIn app will make it easier to use the connections you already know you have and to make more. Xobni will take over the work of managing the contact information for the people you’re already communicating with. It’s been a useful tool on the PC, but you can do what it does by hand; on a BlackBerry, with only 30 days of email, when you've already decided that it’s urgent enough to need to contact someone, having their details magically appear out of your old email could be phenomenally useful. If they work as promised, these will be exactly the kind of app RIM is hoping for to make the BlackBerry stand out against all the other smartphones promising to bring your social network together.