Telenor, Norway's incumbent telco, and DNB, the largest bank in the country, have joined forces to launch a mobile contactless payment product. 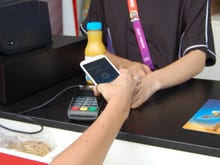 The pair announced last week that they have established a joint venture company TSM Nordic, which is developing a 'virtual wallet' offering based on NFC and its backend product, Trusted Service Manager (TSM).

The virtual wallet will be available to consumers under the brand name Valyou. With the Valyou app on their phone, users will be able to make payments of up to NOK 200 (€25) by opening the app and holding their handset close to a contactless payment-enabled reader. For amounts higher that NOK 200, the user will also have to enter a PIN code.

Valyou will be launched later this year, according to the Valyou website. (Norwegian business newspaper DagensNæringsliv reports the contactless service will launch in the autumn.)

The Valyou offering will have several limitations at launch. To use Valyou, an individual has to be among Telenor's 3.2 million subscribers customers, as well as being one of DNB's 1.8 million customers with a Visa card. On the technical side, the user also needs an NFC-enabled mobile phone with an NFC SIM card – in practice, that means a smartphone from Samsung, HTC, Nokia or Sony, among others. (Apple has currently no NFC-enabled iPhone.) And finally, payments have to be taken through POS machines that support NFC transactions — which means relatively new machines.

In order to stimulate uptake of Valyou in Norway, TSM Nordic is hoping to build an ecosystem around the product and has invited other banks and mobile operators to get involved.

And, with mobile contactless payments still a small market in Europe, the company notes in order to see Valyou take off, NFC readers in POSes will need to become more widespread, as will NFC capability in mobile devices. Doubtless, the pair are both hoping the iPhone 6 comes with NFC onboard.