Following up on an excellent tip given in a comment to my previous post (thanks sahilahuja), and after quite a bit of browsing and reading, I have quite a bit of interesting new information about the Acer Aspire One 522. First, and most important, it turns out that the problem with it hanging on Linux boot has something to do with the wired and wireless network interfaces, and not getting them initialized correctly. The work-around is to simply go into the BIOS setup and in the Boot options move Network Boot to the top of the list! I know that sounds strange, and I was skeptical when I first read it, but I have tested it extensively now, and it really does work, every time - not a single hang since I changed that setting.

Another way around this problem is to boot with a wired network connection - that was actually what I was doing while loading Fedora 16, which led me to believe that Fedora and/or the Linux 3.2 kernel and/or X.org server 11.4 had solved this problem. In fact, the "real" problem seems to be an interaction/interference between the wired and wireless network drivers, so if you know that you are only going to be using one or the other of those, another solution is to blacklist the driver for the other one, in /etc/modprobe.d.

In the process of tracking down this problem and its various work-arounds, I have been using the AO522 quite a lot the past couple of days, and I will say again that it is a very nice netbook. I have switched Linux Mint 12 KDE to the Netbook desktop, and as always it looks nice and is a pleasure to use: 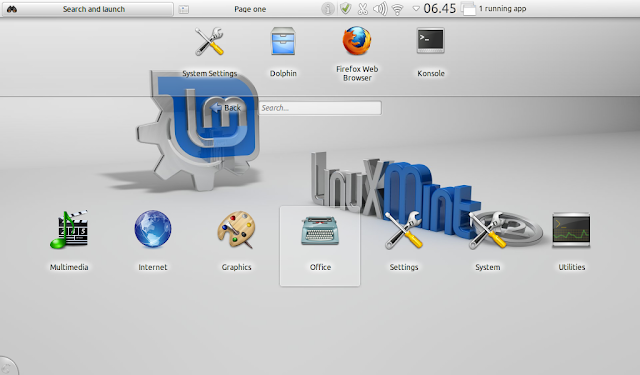 That is by far my favorite desktop when the display resolution is only 1024x600.

That brings me to the other thing(s) I learned about the Aspire One 522 while looking into this problem. There have been a lot of significantly different models under this name in the past year or so. First, there was the obvious step up from the original AMD E-50 cpu and Radeon 6250 gpu to the newer E-60 and 6290. In addition to that there have been some models with 1280x720 screens and some with 1024x600. There have also been some with Broadcom wireless adapters and some with Atheros. There have even been some sold with Linux preloaded rather than Windows - how I wish that I could have gotten one of those here in Switzerland! Anyway, the point is if you are going to buy one of these, make sure that you know exactly what you are getting, so you won't be surprised or disappointed.

I like this one so much that I am going to keep it for my own use for a while. It seems odd to say this, when the screen resolution is only 1024x600, but I find one of the best things about it to be the display, it is very clear and very bright. My next project will be to increase the memory from 1GB to at least 2.