NASA astronauts may soon be able to 3D-print pizzas in space, thanks to technology built by Columbus and Silicon Valley-based startup BeeHex.

BeeHex's flagship Chef 3D robot -- which can print 12-inch pizzas in less than five minutes -- could mean that space travellers will have a more terrestrial alternative to freeze-dried, prepackaged meals that are designed for nutrition and ease of consumption in microgravity.

In addition to producing a range of toppings from fresh ingredients, Chef 3D can fabricate gluten-free and custom-shaped pizzas, according to BeeHex. Like other 3D printers, Chef 3D connects to a computer that tells it which dough, sauce, and cheese to use.

The cartridges are filled with all the necessary ingredients, and the robot's nozzle starts layering liquefied dough, followed by sauce, toppings, and melted cheese.

The reason pizza was chosen as one of the first foods to be 3D-printed is because it involves layering ingredients, which suits the capabilities of the technology, BeeHex said. Unlike traditional additive manufacturing technologies, Chef 3D relies on pneumatic systems to move ingredients around.

While BeeHex was born out of a NASA project -- NASA provided a $125,000 grant to Systems and Materials Research Consultancy to research how 3D printing could be used to make food -- the startup is focusing on broader commercial applications in places like theme parks, festivals, shopping malls, and sports arenas.

BeeHex's pre-production prototypes have been exhibited at various conferences, with a soft launch slated for later in the year. The startup will be working with pilot customers in the food business to test the efficacy of the technology.

BeeHex hopes that in the near future, 3D-printed meals will be ordered via an app, with customers also having the ability to customise meals according to their preferences.

While consumers are yet to fully digest the idea of 3D-printed food, there is interest among food companies to adopt the technology. In July last year, for example, London saw the arrival of a restaurant celebrating 3D printed food, furniture, and cutlery.

For three days and three special meals, pop-up restaurant Food Ink took up temporary residence in a Shoreditch side street to showcase the versatility of 3D printing.

The global market for 3D printed food is anticipated to be driven by a need for mass customisation, as 3D printing saves time, labour, and waste. 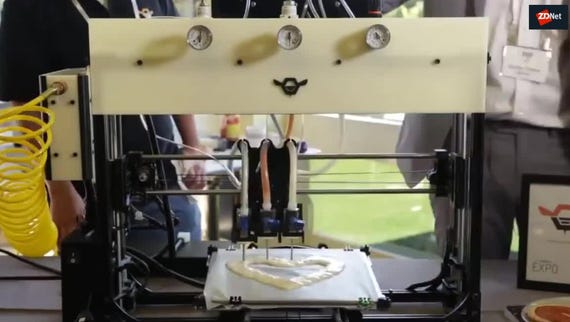 Join Discussion for: NASA astronauts may soon be able to 3D-print...