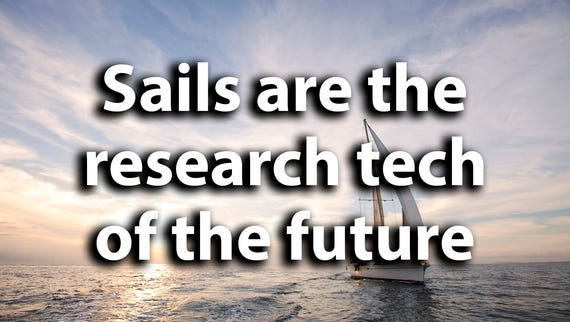 Matt Rutherford was just a few days into his planned unaided, non-stop solo-sailing trip around North and South America when he realized he'd left all his extra pants on the dock. The days of preparation before setting off had been frantic and a few things got left behind. This was a problem. He was facing 309 days at sea with little human contact and his small 27-foot sailboat, which he got for free and outfitted himself, was designed for bay sailing and not the notoriously unrelenting weather and towering seas of Cape Horn or the perilous ice of the Northwest Passage. To cap it off, he had just spilt diesel fuel all over himself, the result of a leaking fuel bladder, and he really wanted a change of clothes.

Most people would have turned back. Rutherford, whose blue-collar background and gruff presentation put him at odds with the Instagram sailing culture that's proliferated among a new generation of seafarers, grumbled something under his breath, checked his course, and pressed ahead on a trip that would secure his place in the record book.

That 2011 trip, during which Rutherford gained enormous respect for polar regions and for the surprising utility of small sailboats, would catalyze a mission that may seem odd in a digital world: To use sail power for science, and in so doing to prove that sailboats, one of the original technologies that helped humanity expand its horizons, are ideal platforms for next-generation data collection in the world's oceans.

When I did the trip around Americas, the ocean became my home. I was no longer visiting the ocean, I was living at Sea. When I got back I wanted to do something that gives back, something that allows me to grow and utilize my skills as a sailor. I wanted something that I could work on for the rest of my life.

Rutherford, a one-time drug dealer (he's open about that fact in interviews) who watched his childhood friends get locked up or killed one by one before deciding life had different plans for him, does not have a science background, but on his adventure around the Americas, he came face to face with the front lines of climate change. "Ground zero for the observations of climate change are in the polar regions," he says. "That's where you see the glaciers retreating and the ice melting." Combined with frequent run-ins with garbage, it was an eye-opening experience.

He also confronted a reality that has stymied scientists for generations: These places are phenomenally difficult to traverse, particularly via boat. "You know, it's uncharted, you don't know where the rocks are and there are rocks all over the place, compasses don't work, the weather forecasts are garbage, there's ice, there's fog, there's polar bears that will eat your head. So it's a really unique challenge."

Those factors contribute to the astronomical price tag of doing science at sea in remote regions. The average cost of a scientific research vessel is estimated at $25,000 per day. In the arctic, that price tag can double, easily reaching or exceeding $50,000 per day. Almost without exception scientific expeditions are done on power vessels, and fuel accounts for a substantial portion of the total costs. It also limits the effective range and duration of expeditions, which must be able to safely return to shore to refuel with relative consistency. That significantly limits the kinds of data collection scientists are able to do at sea.

In 2013, Rutherford teamed up with scientist Nicole Trenholm to found Ocean Research Project, a 501(c)3 dedicated to scientific exploration under sail.

We are forging a new path of discovery by combining modern technology with age-old efficiency to create lower cost research expeditions that provide an effective alternative to the more costly, big science paradigm. ORP's research objectives are born from close collaboration with scientists focusing on the most important issues.

Sail power is having something of a renaissance. Mounting pressure to reduce carbon emissions in shipping have led to renewed interest in wind-assisted ships. Fixed-sail propulsion designs have been proposed for a variety of large ship applications. Autonomous data collection platforms, including underwater gliding drones and sail drones, are making their way into the modern naturalist's toolkit. One problem with these drones, interestingly, is that though they're small and easy to launch, it's expensive for scientists to mount expeditions for launch and recovery, events that can be weeks apart.

Ocean Research Project (ORP) is born from the same spirit. The organization designs unique expeditions that enable small, core teams of researchers to gather critical information from remote, sensitive areas worldwide. During an early expedition in 2013, Rutherford and Trennholm spent 70 days in the Atlantic to survey the eastern side of the North Atlantic Garbage Patch, which at that time was unmapped.

"One of the reasons it hadn't been mapped, and why we were out there so long, is you have to sail all the way to basically the Azores before you can even start," says Rutherford. As any recreational sailor knows, that kind of long-range expedition is perfectly suited to a sailboat, which moves slowly but inexpensively and can sustain a small crew essentially indefinitely with the right kind of equipment and food supplies.

Ocean Research Project is decidedly a bootstrapped affair, in accordance with the lifestyle that has taken Rutherford around the world. It is grant and donation funded and has relied on boats that are begged, borrowed, or bartered. These are often small boats originally designed for short hops in protected waters. Rutherford and Trenholm strip them down and remake them into purpose-built research sailboats.

In January 2019, Rutherford was taping an episode of his podcast, Single-handed Sailing, which is a stream-of-consciousness affair that has a cult following among a certain kind go-it-alone sailor, when he began describing his ideal boat for ORP expeditions. After the show he got an email from a listener who knew of someone with a 65-foot steel sailboat, exactly the kind Rutherford had described. The boat was a home-build project and Rutherford was understandably wary, but when he got there he was delighted. The boat had masts installed and seemed 70% of the way there. ORP has been outfitting and rebuilding it ever since -- an arduous process funded by word-of-mouth donors and support of Rutherford's podcast.

"We need to have the boat in the water early April and then we got to leave for Greenland probably by mid-may and we have about a half-million dollars of scientific equipment this time."

That includes a multi-beam sonar for mapping the ocean floor in accordance with the UN Seabed 2030 Project, as well as equipment to measure glacial sediment and resulting nutrient blooms in Arctic waters. ORP will also be ground-truthing satellites for NASA, conducting microplastics research, and doing a variety of water sampling.

The estimated daily cost of the expedition will be $3000 per 24 hours, a small fraction of a traditional research vessel.

Interestingly, Rutherford sees a blending of the newest and oldest technologies as an ideal approach to data collection. Aerial, aquatic, and submersible drones, for example, are a perfect use case for his organization's sail expeditions.

"Fully autonomous data collecting robots are going to play a large role in the future of ocean research and they're already playing a bigger role every single year. These Technologies are not massive and are perfectly supported on, say, a 65-foot boat at a fraction of the cost. And really that's where you show the true capability of the sailboat being a professional data collection platform. It's slower in important ways for probes and mapping the seafloor, it's much more cost-efficient, and it's the integration of these new technologies that are really going to take off as time goes on."

Visit the Ocean Research Project website for information on how you can support the organization's work.