The football league is harnessing technology to better understand in-game injuries. But players may not see improvements any time soon.
Written by Jordan Davidson, Contributing Writer on Aug. 7, 2015

NEW YORK -- The National Football League (NFL) has funneled millions of dollars into big data and biosensors to help understand player injuries better. But whether the tech is put to use remains to be seen.

The NFL released Wednesday its annual health and safety report, outlining changes to the game meant to improve player safety, and a new analysis of helmet performance to better understand how players suffer concussions on the field. 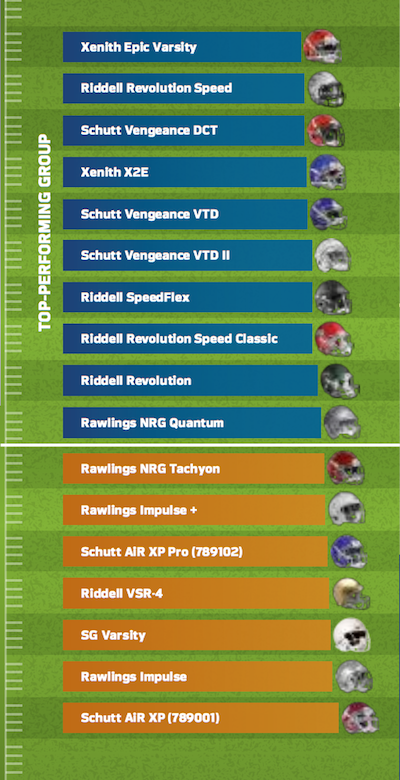 The report landed four months after a class-action settlement, brought by thousands of its former athletes, which in part forced the NFL to improve transparency within the organization.

But while senior NFL executives expressed an interest in using technology to make the game safer, any plans to do so are likely years away.

The report's analysis, conducted by independent lab Biokinetics Inc., tested the efficacy of 17 helmets used in the 2015 season. The report said the test did not evaluate on-field, real-time, or any of the real-world impacts that are typically seen during a NFL game; rather, the helmets were affixed to a crash test dummy head with a flexible neck, and hit with an impactor ram.

Using the lab's data, the NFL's specialist head, neck, and spine engineering committee ranked the 17 tested helmets from best performing to least. The NFL said it will post the results, which were included in the safety report, in locker rooms this season.

Beyond that, NFL senior executives said it has no other plans for the data. The NFL will not recommend that players use a certain helmet, nor will the organization use this data to create a better helmet itself.

Dr. Jeff Crandall, director of the NFL's Head, Neck, and Spine Committee, said it was at the helmet manufacturer's discretion whether or not they use the data to improve their products.

"Ultimately, they are the ones who will take this information and figure out what they want to do with the design," said Crandall.

"You could imagine that if you were a bioengineer at one of these companies, you'd probably want to make your helmets as safe as possible... we hope," added Dr. Betsy Nabel, the NFL's newly-appointed chief health and medical advisor, who was hired just two months prior to the settlement.

But for four out of five manufacturers already ranked in the top performing tier of the helmet study, there may not be any motivation. Only one company, responsible for just one of the seventeen helmets, lands in the bottom tier. Regardless of their ranking, all 17 helmets were certified for safe professional use by non-profit watchdog National Operating Committee on Standards for Athletic Equipment (NOCSAE). The graphic that the NFL will provide its athletes -- a bar graph which represents each helmet's score -- shows little difference between the two separate tiers.

When asked why the leading helmets did not appear to differ much from the lower-tiered helmets, Crandall confirmed in a follow-up call that they "are starting to converge and perform more similarly," compared to five years ago.

The NFL said it was invested and committed to improving player safety with technology, trumpeting its Head Health Initiative, which it announced in 2013. From the four-year $60 million collaboration between the NFL, GE, and mobile app and data-harnessing firm Under Armour, $20 million has gone to the Initiative's open innovation challenge. Twelve companies are currently receiving a slice of the funding for projects including diagnostic blood tests, improving imaging and diagnostic technology, and new materials for helmets and synthetic turf.

While these funds are a boon for these smaller companies, they represent just a drop in the bucket for the NFL, which reportedly made an estimated $12 billion last year. The NFL, which charges $4 million for each half-minute Super Bowl ad, could recover its costs in just over seven minutes of Super Bowl commercials -- or about one-eighth of its commercial airtime, according to one breakdown.

When asked if the NFL will be using any of the project winner's designs within the next five years, Jeff Miller, Senior Vice President of Health and Safety Policy, said: "If these products come to fruition, and some of them will, and they're validated, then most certainly we would look for any opportunity to more objectively identify any injuries or prevent them."

In other words: we may not see the NFL use the new tech on the field anytime soon.

The big question is, in the meanwhile, now what? The NFL could be commended for collecting data and being more transparent, but there are a few holes in the effort.

The NFL will not recommend its players use a certain helmet, nor will they use this data to create a better helmet itself. That's in part because the data collection comes with its own technical challenges. Dr. Richard Ellenbogen, co-chair of the NFL's Head, Neck, and Spine Committee, said in a trial two years ago that the sensors in the helmets "weren't very accurate" and much of the data wasn't useful.

Publicizing the importance of head injuries -- along with rule changes -- has helped the NFL decrease concussions by more than one-third. But if the league is truly focused on player safety, it needs to be the authority of protective gear.