Amazon is signaling its role as a friend rather than foe to product makers with a new brand registry aimed at cleansing its platform of fakes.

The new registry will enable brands that register their own logo and intellectual property to initiate a takedown of product listings when they identify potential counterfeits, Amazon Marketplace vice president Peter Faricy told Reuters. 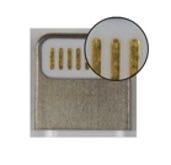 How to avoid buying counterfeit Apple cables and chargers

Apple says its investigation found that 90 percent of into Apple-branded goods sold on Amazon are counterfeit. Here's are some tips on how to avoid being caught out.

The new counterfeit-fighting tool, which could be available as early as spring in North America, is currently being tested and would be a free service.

The registry will allow brands, shoppers and Amazon to raise a warning over counterfeit goods, which Amazon may then take down.

According to Faricy, Amazon is in an early phase of its campaign to stamp out counterfeits. It follows Birkenstock's decision last year to yank permission for third-party merchants to sell its sandals on the site.

The shoe maker complained that it was hard to gain Amazon's support to battle against fakes unless it sold its entire range on Amazon.

Apple last year filed a suit against a US firm for selling bogus Apple-branded power adapters and cables on Amazon. The iPhone maker claimed that 90 percent of Apple products it bought on Amazon were counterfeit.

Amazon has filed a law suit to prevent what it says was a "small number of bad actors" peddling fakes on its site. It's also tightened up restrictions on selling USB-C cables that are not compliant with USB standards, but this was after a Google software engineer raised safety concerns over the bogus products rather than counterfeit issues.

News of Amazon's anti-counterfeit effort follows a report in November by ZDNet sister site CNET that Amazon was considering anti-fraud tools under a project called Brand Central that would help sellers protect their intellectual property.

One brand owner, who claimed to have knowledge of Brand Central, said he expected Amazon to significantly step up its fight against knockoffs this year due to the growth of brands selling directly on Amazon.

The initiative would complement its Seller Central site that largely helps resellers of commodity items, but is light on tools for brands.