MIAMI, USA--Nutanix has introduced two key products that push the vitualization vendor up the software stack, pitting it more firmly against VMware, as it seeks to ease the deployment and management of virtualized enterprise environments.

Nutanix is evangelizing its hyperconverged platform Acropolis and management tool Prism, as the way for enterprises to easily run, move, and manage virtual machines--regardless of the hypervisor make.

Executives at the vendor's inaugural .NEXT user conference held this week in Miami, USA, pitched the idea of an "invisible infrastructure" spanning storage, compute, and cloud layers that should run seamlessly in the background.

They noted that business applications today often were deployed on traditional storage and virtualized products that were not only complex and expensive to manage, they also lacked the ability to scale. Removing the complexity in managing such infrastructure would allow enterprises to focus on what matters more--applications and services, Nutanix said.

Wrapped under the umbrella name, Xtreme Computing Platform (XCP), Acropolis and Prism would allow enterprises to choose the virtualisation technology they preferred and manage their virtualized environments. Acropolis is an extension of Nutanix's flaship hyperconverged OS, and includes a distributed storage and app mobility fabric as well as its new native Acropolis hypervisor, which is based on the Linux KVM hypervisor.

Touted as a user-friendly management tool, the vendor says Prism allows users to carry out VM and workload planning, provisioning, remediation, and upgrades in one click.

With the introduction of XCP, Nutanix has effectively moved up the stack beyond its hypercoverged storage gameplay and into an area where VMware dominates.

And with Microsoft's principal group program manager, Vijay Tewari, invited to join the stage at .NEXT to discuss Redmond's support for the new Nutanix software stack, it was clear who the common rival was.

Nutanix's increasingly uneasy relationship with VMware was inevitable, as incumbents typically would look to either squash or acquire companies that were starting to see strong market growth, said Nutanix's senior vice president of marketing, Howard Ting.

"We knew this day would come and the way we deal with it is the classy way," Ting said in an interview with ZDNet at the conference. "We try to stay out of the tit-for-tat...they're trying to do that to us, but we want to stay above that. And when they do anything that's unfair to us, we will want to address that...and we do so by being objective and transparent."

Asked to elaborate, he pointed to a blogpost last week by VMware's chief strategist for storage and availability Chuck Hollis, who published a performance test between VSAN sand Nutanix, both running on Dell hardware. 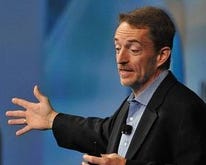 Analysts warn that VMware will face increasing competition from startups and established cloud players, but VMware CEO Pat Gelsinger says its focus on providing "value" via its products will keep these rivals at bay.

Hollis wrote about a recent change in Nutanix's EULA (end-user license agreement) that prevented VMware from publishing the results of its performance test, prompting a tart response from Scott Drummonds, Nutanix's Asia-Pacific director of strategic accounts.

Ting said performance tests were "a very nuance thing", particularly when results were based on a vendor's own in-house testing. He revealed that Nutanix had suggested getting a third-party reviewer instead to run the tests but VMware was unwilling to do so.

With Nutanix now playing directly in VMware's space, no doubt, there will be more of such public spats to come.

[Editor's note: June 15] VMware provided a response to ZDNet's query on the increasing competition from Nutanix:

"Within the virtualization space, we have always perceived Microsoft and AWS as long-term competitors, and have also competed with Citrix previously. However, in the case of Nutanix, which has since called out VMware as its main rival, is also a partner of VMware with its startup products run in VMware environments. VMware's focus is primarily software solutions, and we believe the unquestioned leader in converged infrastructure is VCE, resultant from the joint venture between VMware, EMC, and Cisco Systems. The technology industry is well known for "coopetition", where we compete and cooperate as we're trying to create a whole category of players. We're quite confident the market dynamics would be well suited for our customers. VMware focuses on the role of enabling those hardware vendors with our software to compete in that category of hyper-converged infrastructure."

Regardless of the tensed relationship, Ting said customers would not be affected as Nutanix would continue to provide the certification and support for all environments, including VMware, with its new offerings.

He noted, though, that there was "a lot of discontent" among customers over VMware's ELA (enterprise licensing agreement) push. "So we want to give them the option to break free of that," he added.

It seems, too, that the vendor is hoping enterprises would "break free" toward its direction with the release of Community Edition, which is the free version of its hyperconverged software.

Jeffrey Hewitt, Gartner's research vice president, said Community Edition would allow potential customers to do their own research and determine whether they were comfortable with the product's credibility.

It would enable prospective customers to examine Nutanix's software capabilities, helping to spread awareness about its features and functionalities, Hewitt added.

But while it would help fuel some growth for Nutanix, the Gartner analyst said the extent of its adoption remained to be seen. "This is still an immature market with a lot of competitors, and large deals or acquisitions can change things rather suddenly at this phase," he noted.

He added that the startup already was perceived a pioneer and innovator in the hyperconverged space, but even if it was able to increase its reach through Community Edition, Nutanix would need to ensure it could generate revenue and profits in the enterprise market.

Still an unknown brand in Asia-Pacific

In addition, it was still a relatively unknown brand, especially in the Asia-Pacific region, and faced challenges competing against the bigger boys. While Nutanix clearly was one of the market leaders in the hyperconverged space, there were several competent players such as VMware with its EVO:RAIL offering, Simplivity, Maxta, EMC, and HDS.

Baltazar explained: "As a startup, Nutanix will continue to face brand awareness issues against large players such as VMware. That said, partnerships such as the OEM partnership with Dell will greatly expand their reach and can help put aside any doubts a customer may have about the long-term viability of Nutanix.

"The Asia-Pacific market is a difficult space that will require a big investment and partners to become successful," he added.

Asked about the challenges and opportunities Nutanix faced in addressing this region, Hewitt pointed to the need to increase awareness across potential customer segments, generate market demand, and boost its service and support capabilities across Asia-Pacific.

"Their best strategic play is focusing on cost reduction through obviation of the SAN and relatively rapid deployment and scalability," he explained. "They got to spread the momentum that they have created in North America and Western Europe using that messaging."

Ting acknowledged that the Nutanix brand still was not on par with that of VMware in terms of identity or recognition, but said the company was spending more on marketing and advertising to address this. Its network of resellers and OEM partnership with Dell also would go a long way in elevating its brand and taking it global, he added.

"There are no shortcuts to brand building so we have to just build it one at a time," he said, pointing to the Community Edition as another way the company was looking to extend the reach of its product. It had received 3,200 registrations for the beta, which was made available for download this week.

The vendor also will be looking to boost its presence in the Asia-Pacific region through its channel partners and potential OEM partners in China and Japan. It currently hires some 100 people across 15 offices in the region including Japan, Korea, Singapore, Australia, and Malaysia. India, which is excluded from this geography, is managed out of the company's EMEA office in Dubai.

All of its sales in the Asia-Pacific are handled through its channel partners and this will remain a key strategy for Nutanix moving forward, Matt Young, Nutanix's vice president for Asia-Pacific and Japan, told ZDNet. The vendor has two distributors in each country, and Hyundai, Maybank, NTT, and Telstra are among its clientele in the region.

While the company had no plans to sign on more resellers in the local markets, Young said it was exploring local OEM deals in China and Japan similar to the global agreement it has with Dell.

It also will be taking the .NEXT conference on a roadshow across the Asia-Pacific region, where it will host half-day versions of the conference in markets in which it operates, including Singapore, Manila, Kuala Lumpur, and Jakarta.

Based in Singapore, Eileen Yu reported for ZDNet from Nutanix's inaugural .NEXT user conference in Miami, USA, on the invitation of Nutanix.