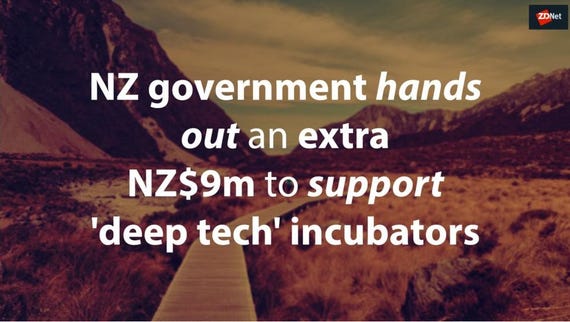 The New Zealand government has announced it will top up the kitty for the New Zealand Technology Incubator program with an extra AU$9 million over three years to further support businesses looking to scale up and commercialise their ideas.

Minister for Research, Science, and Innovation Megan Woods said the amount would be on top of the existing NZ$25.5 million that was allocated in the 2019 Budget to the New Zealand Technology Incubator program.

The Technology Incubator Program is headed up by the government's innovation agency, Callaghan Innovation.

"And as the government's innovation agency, their incubator programs have produced 45 new startups and attracted more than NZ$50 million in private capital, making a strong case for continued government investment."

Callaghan Innovation is currently running a request for proposals (RFP) process to select incubators that are "internationally connected, backed by sufficient capital and focused on pathways to global markets".

Successful incubators will gain access to contributions to operational costs and access to repayable loan funding of up to NZ$750,000 for each venture that they incubate.

Under the RFP terms, international incubators would be expected to establish a "significant presence" in New Zealand, such as by establishing a New Zealand-based subsidiary that will include permanent location of key management and incubation expertise.

The RFP is open to current, local, and international providers, and will close on October 4.

With NZ$25 million in operating funding and NZ$50 million in capital, the government in its 2019 Budget announced it was also enabling Callaghan Innovation to redevelop the Gracefield Innovation Quarter.

The New Zealand government is also a step closer to getting its proposed NZ$300 million Venture Capital Funds Bill legislated, after it passed its first reading in Parliament last month.

If the Bill is passed, the funds will be aimed at startups looking to expand their business in New Zealand.

The Bill is one of the key elements that form part of the New Zealand's Wellbeing Budget. In one of the six key areas outlined in the Budget, the New Zealand government wants to build a productive nation by "supporting a thriving nation in the digital age" through innovation, social, and economic opportunities.

Following the passing of the first reading, the Bill is now be open for submissions during the Select Committee process and government agencies will be consulted directly with industry.

Over the next five years, the New Zealand government will support Pacific countries as they secure their infrastructure and data, enhance online safety, and implement new cyber crime laws.

If legislated, the NZ$300 million Venture Capital Funds will be aimed at startups looking to expand.

Venture capital, connecting businesses with government, computers in homes, and national security initiatives will all secure funding in the country's 2019-20 Budget.

The changes were prompted by the Christchurch Call that happened earlier this year.

Join Discussion for: NZ government hands out an extra NZ$9m to...