Last week at IFA, the giant consumer tradeshow in Berlin, PC makers were out in force. Three of the five largest PC OEMs in the world--Lenovo, Asus, and Acer--were on hand, with well-stocked booths and a steady stream of visitors.

Collectively, those three firms account for about 1 in every 3 PCs sold worldwide. Toshiba and a few other smaller players were present, and both Microsoft and Intel were showing off devices from other partners, including Dell and HP, (Those two companies, which do a disproportionate amount of their business in the U.S., were missing from the European show's exhibitor list.)

In general, the OEMs I spoke with were bullish about Windows 10's ability to reverse the steady, slow decline of their industry. But is their confidence justified?

And are the newest designs just gimmicks or are they genuinely useful?

Windows 10 is undoing the psychological damage caused by Windows 8. Meanwhile, those OEMs are hard at work turning out PCs that don't exactly fit the mold of the classic desktop tower and clamshell laptop. In theory, those alternative form factors represent growth and perhaps even better margins.

Acer's pre-show press conference was, in many ways, a summary of the PC industry's fortunes, in microcosm. The parade of devices onstage was unconventional, to say the least, ranging from a convertible Chromebook to a Windows-powered Cloudbook (aimed at the education market), along with a thin 2-in-1 and a gigantic Windows 10 gaming machine.

At a keynote later in the week, Nick Parker, Corporate VP of Microsoft's OEM division, showed off an equally diverse line-up of Windows 10 devices, most of them in unconventional form factors. The most offbeat offering was a tiny "environmental data logging device" from Toshiba, running Microsoft's Internet of Things (aka embedded) version of Windows 10.

Those alternative form factors are interesting, but they raise two big questions. Are they simply cannibalizing sales from traditional devices? And are the newest designs just gimmicks or are they genuinely useful?

These thin and light devices are nominally notebooks with a screen size of 10 to 14 inches; the hybrid part is the ability to convert to a tablet by detaching the keyboard (like the Surface Pro 3) or flipping the keyboard on a hinge (like Lenovo's Yoga Pro 3) so that it tucks behind the screen.

It's been a slog, but this category is finally taking off.

Two months ago, Gartner projected that sales of these devices would soar by 77 percent in 2015, to a total of 21.5 million, and continue outpacing the rest of the PC market for at least the next few years.

Acer's experience confirms that trend. According to CEO Jason Chen, the company's sales of 2-in-1s are up 80 percent from last year. Granted, that's from a small base, but it's still good news for Acer, which has struggled in recent years.

This year's offering in the category is an update to the Aspire R 13, which gets an Intel Skylake processor as it matches the Yoga's ability to twist into a full range of screen positions. It's definitely a premium device, and with support for Thunderbolt 3 seems aimed at a buyer who also has a MacBook on the shortlist. 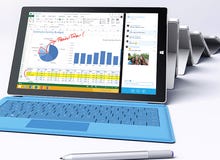 Microsoft launches Surface Pro preemptive strike vs. Apple's iPad Pro Microsoft is hoping some distribution firepower and some help from HP, Dell and Accenture can offset Apple's increasing momentum in the enterprise and the launch of the iPad Pro.

The biggest indication that this category is the one to watch? This week's announcement that Dell and HP will be reselling the Surface Pro line to their commercial customers is more proof that this is a growing segment of the market. And in the "imitation is the sincerest form of validation" department, there's Lenovo's Miix 700, which is an unabashed clone of the Surface Pro, right down to the kickstand and the snap-on cover that doubles as a keyboard.

I had a little hands-on time with the Miix and wasn't overly impressed, especially by the Bluetooth keyboard. (Kevin Tofel disagrees.)

More impressive was the Toshiba Radius 12, with Yoga-like versatility, a 4K edge-to-edge display, and Windows Hello facial recognition. Most of the Toshibas I've seen in the wild in recent years have been low-budget laptops, so it's nice to see such a polished and ultralight hybrid, even if the price is likely to be high.

I've seen plenty of machines in this class in the wild. They'll probably continue to be a premium item and will probably account for a disproportionate amount of the profit in the PC industry in the next few years.

These days everyone's got a tiny PC. I've owned several incarnations of Intel's NUC devices and have been running Windows 10 on an HP Stream Mini for the past few months.

Acer's new Revo Build isn't quite as small as those, but it makes up for it with a unique twist: a modular design that lets you expand the system with "blocks" that snap into place to expand storage and add a wireless charging pad that doubles as a portable battery.

It all feels a bit gimmicky, and while the design is imaginative, it's hard to imagine enough third parties producing proprietary add-ons to make the design succeed in the long term.

In fact, it's hard to see the entire category being much more than a niche. That's especially true as one of the core use cases for this class of device, the PC-based home theater, gets pushed out by consoles and even smaller devices, like ...

PCs on a stick

The Asus VivoStick is the latest entry in a very crowded field contending for the second (or third) HDMI input on your big-screen TV. And while it's undeniably cool to see a full strength PC shrunk to the size of a flash drive, it's also hard to see the appeal over other, simpler devices designed to stream content from a notebook or tablet.

Yes, it has two USB ports, but as soon as you start plugging in external devices this solution isn't nearly as elegant and simple as it was. At $129 (including Windows 10), the price is probably low enough to attract a hard core of enthusiasts, but the real question is whether there are enough people who want the hassles of a full PC (even if it does come with its own smartphone control app) when simpler streaming options are available.

Continuum: the phone as PC

And then there's the piece of the Windows 10 device that technically isn't a PC at all.

The great promise of Windows 10 Mobile is its ability to turn a phone/phablet into a (nearly) full-fledged PC, through a feature called Continuum. It makes a great demo, with Universal apps like Mail and the Office Mobile series expanding to fill the larger monitor and respond to a keyboard and mouse.

Acer showed off a design it called the Jade Primo, a Windows 10 Mobile device that includes a small docking station. After the obligatory demo, CEO Jason Chen exulted: "I've been hearing about PC phones for 10 years. This is the first one that really works."

Which is all well and good, I guess, but it's hard to imagine the situations where that phone can turn easily into a PC. Will people really keep those disconnected external peripherals handy on a desk just waiting for someone to hook up a Windows 10 Mobile device? And if you have to carry around your own keyboard and mouse it cancels out the "one device" promise and makes hybrid devices a more sensible alternative.

Apparently the prototype unit shown on stage was one of a kind, because it wasn't available for inspection after the press conference, and other reporters I talked to said they were unable to get a closer look as well.

After two days of press conferences and keynotes as well as a day of walking the IFA show floor, I was impressed by the breadth of engineering in the PC space. But with the exception of hybrids that can pass as a conventional laptop when needed, I'm skeptical that many of these alternative designs will achieve mainstream success.

Disclosure: A portion of my travel expenses were paid for by the group that runs IFA