Oracle CEO Larry Ellison described on the stand the different licenses available for Java, citing that Google is the only company that hasn't signed up for any of them.
Written by Rachel King, Staff Writer on April 17, 2012

SAN FRANCISCO -- Oracle CEO Larry Ellison defended his company's patent and copyright infringement suit against Google on the second day of the trial on Tuesday morning.

Although Google CEO Larry Page was technically called as the first witness by Oracle's legal team, Ellison was the first to take the stand at the U.S. District Court in San Francisco as Page's testimony was presented via video from his deposition last August.

When writing a program in Java, Ellison explained that developers do two different things: they use the Java programming language, and then they reuse the library of pre-written Java programs.

When asked whether or not it is expensive to develop APIs, Ellison sighed and responded, "Arguably, it's one of the most difficult things we do at Oracle."

Ellison said that there are three kinds of licenses: GPL open-source, specification, and commercial.

Some examples of companies using commercial licenses include RIM for BlackBerry and Amazon for the Kindle.

Describing Java specification licenses, in particular, Ellison explained that this license lets developers look at the Java documentation -- not the source code. Then using those design specifications, developers can build their own version of Java, using the design and specs.

Examples of these companies that fall within the Java community (but are also competitors of Oracle) include IBM, SAP and Hewlett-Packard.

When asked by Google's defense attorney Bob Van Nest if the Java language is free, Ellison hesitated. Judge William Alsup pushed Ellison to give a yes or no answer, and Ellison resisted and huffed, "I don't know."

"I don't know if you can copyright a language," Ellison explained later during his testimony, "I just don't know the answer to that question."

Van Nest reiterated that Google is not promoting its smartphone platform under the name Java, but rather a different name: Android.

Van Nest then followed a line of argument that basically tried to assert that Oracle has backtracked on its support for Android, and it's now filing a suit after Oracle couldn't get into the smartphone market itself.

Recalling a speech that Ellison made in June 2009 at JavaOne with then Sun Microsystems chairman Scott McNealy (as seen in the video below), Van Nest questioned Ellison if he remembered his remarks, to which Ellison replied he did. 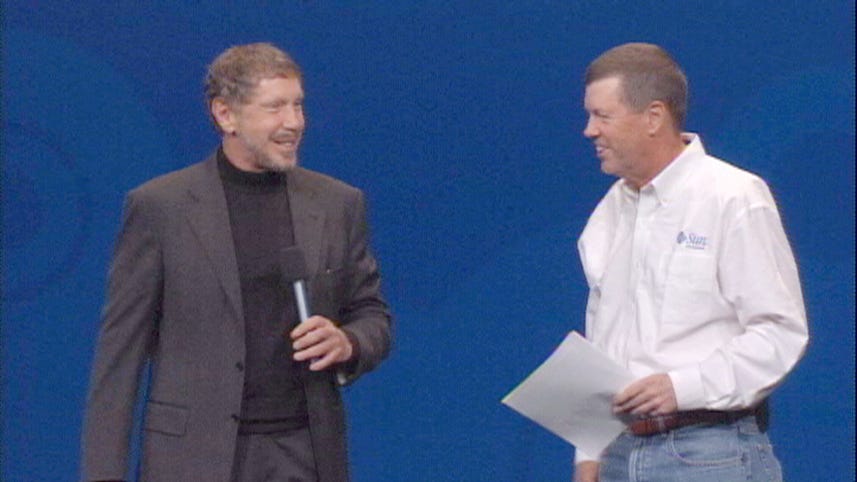 During the event, Ellison had said that he expected to see more Java devices coming from "our friends at Google." Van Nest highlighted the part where Ellison praised Sun, saying that it had done "a fantastic job" in opening up Java and giving it to the world.

Van Nest then asked Ellison if a "primary factor" behind buying Sun was to get into the smartphone business. On the stand, Ellison replied no.

When Van Nest brought up a video clip from Ellison's deposition in August 2011, Ellison was asked if Oracle wanted to use Java to expand into the smartphone business as well as to compete with Apple.

At the deposition, Ellison replied yes on both accounts.

On the stand, Ellison defended his remarks by pointing out that Van Nest said a "primary factor." Ellison asserted that it was only a simple "factor," as it was "an idea worth exploring," but not one of the "primary" motivations for buying Sun.

Ellison had trouble remember his past statements again later during his testimony. After being asked about internal plans regarding expanding into the smartphone market through potential acquisitions (Palm wasn't considered competitive enough and RIM was rebuffed for being "too expensive"), Ellison was questioned about a meeting with Google's Eric Schmidt about Java and Android.

On the stand, Ellison first said that this was "not a joint project," but rather Google could take Oracle's version of Java and put it into Android.

When Van Nest brought up Ellison's deposition from August 2011 again, Ellison affirmed that it was a joint project. Google's lawyers described the meeting to discuss Google engineers working with Oracle engineers to improve and put out a better product. Ellison replied at the time, "Correct."

When on the stand, Ellison relented and said, "I called it a joint project. Okay."

Obviously, those talks fell through. The next interaction after that was the lawsuit being fought at trial now.