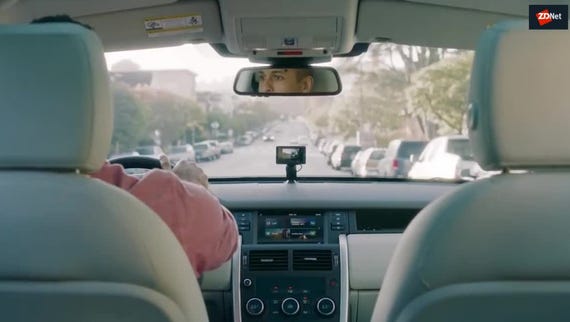 In the chasm between cruise control and Level 5 autonomous driving, there are millions of drivers who could benefit from upgrades to their vehicles. But many companies wrestle with a paradox. The older a car is the more likely it would be that owners would lack modern features such as smartphone integration or lane-change warnings. However, the older a car is the less likely it is that owners would want to invest in it. This is particularly true when a car is leased, in which leases may be limited in how much they can modify a car.

Special feature: Tech and the Future of Transportation

https://www.zdnet.com/article/free-pdf-download-tech-and-the-future-of-transportation/Take, for example, Verizon Hum, one of a few carrier products that add a cellular hotspot to the vehicle and then build features on top of it such as driving alerts, car location and geofences, and emergency roadside assistance. Because many of these products connect to the OBD2 (On-Board Diagnostics 2 jack) connector generally near the driver's left knee, they can also report, interpret, and even dismiss ambiguous warning lights such as "Check Engine." While that port is powered, Hum also uses a visor-mounted unit as a speaker. It can last more than a month in idle mode and obviously a lot less if you hit the hotspot hard.

The product does a good job of keeping tabs on your driving habits, e-mailing you a monthly report and such telematics products have already taken an early lead in carriers' IoT revenue reporting. But with more new cars coming with a built-in hotspot and smartphone connectivity, its value may come down to whether you find value in Verizon's network and supplemental businesses. The product's navigation, for example, is tied to its property MapQuest, not a far more popular offering such as Google Maps.

One new startup has addressed the car aftermarket investment paradox with a product that offers some of these diagnostics-related features, but differentiates further from integrated automotive OEM by expanding the capabilities and relevance of limited-purpose dashcams. Dubbed Owl, the product offers a few things missing from other in-car video capture devices. These include a 360-degree view of the car's surroundings, sensors to detect a crash or other disruption, and an always-on LTE connection. It adds a monthly $10 fee to the product's $299 price tag (products like Hum also have a monthly fee).

Owl's developers see the cellular connectivity as critical for sending out notifications in real time in case of a crash as well as simply providing an easier way to get video off of the device. Owl is also not just a reactive observer. As it detects movement outside of a car portending a break-in, it can issue warnings via its LED floodlights and relay video in real time of the threat.

Since the rise of portable navigation devices by Garmin and TomTom, mounting such devices effectively and elegantly has been a challenge. And while it may be the lowest-tech aspect of Owl, its developers seem to have nailed it with a protruding mount that extends from the center of the dashboard and is wedged into the space between the far end of the dash and the windshield. This has the bonus of allowing easy snaking of the power cable down to the OBD2 port, which solves another challenge with dashcams: keeping them charged. Owl will keep the last rolling 12 hours of its footage available for playback with "incidents" being kept indefinitely.

While safety and vehicle protection are the two main applications for Owl, it has other applications and potential uses. For example, the view of the front seat passengers that it captures is perfect for capturing an inspired round of "carpool karaoke" or, for rideshare drivers, documentation regarding allegations of a passenger-reported incident. Other potential applications range from the trivial (selling an in-car cellular hotspot option) and Hum-like geofencing and speed alerts to the more advanced but differentiated (monitoring drivers for signs of fatigue).

Given that cars have only one OBD2 port, there's more pressure to cram in functions that might be served by a competitive product. For now, though, Owl has focused on an area that sets it apart by targeting functionality that is not in new cars and yet of value to new car owners.

Verizon launches Hum, a smart device for your dumb car

https://www.cnet.com/roadshow/news/verizon-launches-hum-a-smart-computer-for-your-dumb-car/The mobile-app-supported Hum allows people to monitor a vehicle's health and to contact nearby roadside assistance. Out of the box, Hum works with over 150 million vehicles.

https://www.zdnet.com/product/z-edge-z3-plus-dash-cam/Z-Edge offers dashcams that are easy to install and will capture all the information you need

Join Discussion for: Owl camera watches over your ride from the...