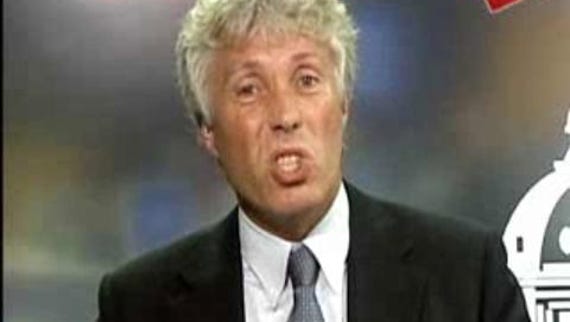 Simon Jennings talks about the success of the Oxfam water bucket and the group's unusual catalogue which sells everything from camels to desks. Below are excerpts from the full video interview.

Q: You're the CIO of Oxfam Great Britain which is part of Oxfam international. Could you explain the scope of your responsibilities as well as how Oxfam GB fits into the international organisation?
Jennings: The first thing to understand is that Oxfam is an organisation that is trying to tackle the issues of poverty and suffering around the world. Oxfam International is the umbrella organisation. It's a confederation of 12 organisations that include Oxfam America, Oxfam Netherlands, which is known as Novib locally, and Oxfam Ireland. Oxfam GB is one of those organisations.

As I understand it, Oxfam GB is a rather large organisation.
Jennings: Yes, Oxfam GB is about twice the size of the second largest Oxfam in terms of revenue, and was in fact the original Oxfam -- starting in 1942 during the war. The organisation's got 5,300 employees around the world, we operate in 70 countries. We have about 144 offices that staff work out of in those countries. My responsibility, therefore, is to ensure that 4,000 PCs are working on Monday morning. Of course it's much more complicated than that because, really, it's about ensuring the business processes of the organisation can operate efficiently and effectively around the world.

Operating all those offices is a real IT challenge. How does innovation help you in meeting that challenge?
Jennings: I think the challenges in innovation are always about how we apply new learnings to a problem and get an answer -- which is a new approach. Before I go into IT examples I'd just like to give you an example of innovation that Oxfam GB has come up with in the past. This is a thing called the Oxfam bucket. What's so innovative about a bucket? In this case we had to look at how we transport water for a displaced family and keep it safe and clean.

First, we needed a bucket with a capacity that was not too heavy to carry -- and you actually have to grind the plastic molding pieces off the bottom because in many of the cultures where we work they carry these things on their heads. The second thing we looked at was sanitation -- we wanted to keep it clean (we are talking perhaps about carrying it through a camp). So the bucket had to have a lid on it -- to stop things falling into the bucket or insects getting into it. It also needed a tap on the bottom, an insertable tap that allows you to draw water from the bucket without putting in any dirty implements to bring it out. Lastly -- the real interesting piece of this innovation is that these buckets take up about a tenth of the size of the old jerry cans. And of course, when you're transporting in a plane, the thing that matters is size. So it's a very good example of innovation, and in fact this bucket won a design award.

So it seems that innovation for you is not just technology, it can be process, it can be organisational, it can be products such as the bucket.
Jennings: Absolutely. Another good example from about two years ago was one of the business challenges that Oxfam faced: how could we engage with our supporters better? These might be people who are donating money to Oxfam and trusting that what we will do with that money is good program work and will affect poverty and suffering overseas. What we developed to better engage with those supporters was a thing called the Oxfam Unwrapped catalogue. What we have is a catalogue of products like mosquito nets, camels, water tanks, desks, and people can now fund desired items. They can buy a gift for a friend who is then given a card which says -I have bought you a desk in a school." And Oxfam will deliver that desk.

So, it both enables the supporters to engage with us directly in what we're doing, and it also happens to be an excellent fundraiser for us. But it also means we maintain our accountability -- the ability to show that we did actually put this many desks into schools, or we did buy this much livestock. That's very, very important because accountability and trust go hand-in-hand in the way we operate.

You have over 5,000 employees, 20,000 volunteers, and people all over the world dealing with poverty and starvation. How do you manage that from an IT perspective?
Jennings: There are two real pressures on us. One is the delivery of application services to people who are based in offices. The second one is mobility. If you look at the office delivery we have, effectively, a VPN, with offices on the end of that VPN.

The mobility issue is a significantly different challenge because we are structured into eight regions ... we have regional administrative centres who manage between six and 10 countries each. The regional management is often going out to assess what's happening in the field, going to country offices, doing training and evaluations and so on, or hiring people. And of course that means that they are in a mobility world very similar to many organisations in the commercial world.

Our second challenge for mobility is where we're actually going into humanitarian disasters. They need to communicate what is happening and what they need so they can call on the resources of the organisation. But we also need communication to ensure their security. Many of the places our people work are relatively insecure, so you need to make sure that there are at least two forms of secure communication for anybody that's working away from the office in a troubled zone. We did some work a couple of years ago to see how we might produce a product that enables a humanitarian worker to have a laptop that could connect to a satellite so that they would be able to exchange voice and data. We actually came up with one internally but it was very quickly eclipsed by the market. And so we've been working with major suppliers. For example, we're looking quite closely at the Inmarsat BGAN product which gives broadband -- good, good quality broadband -- worldwide coverage.

Oxfam is in many of the hotspots around the world, and so are other NGOs. How much are you communicating with those other NGOs on the topic of how do we innovate, how do we not just try to invent everything ourselves, but take advantage of what others had done?
Jennings: There are two direct collaborative groups that we're working with at the moment and both of them are quite closely linked. In the humanitarian world we're working with seven other NGOs such as Plan and KUS that are working specifically on emergency capacity building. There are four steps in the project, one of which happens to be focusing on IT. Now that particular piece of work we started out with, which was funded by Microsoft, enabled us to assess our responses to the tsunami and in Pakistan and we've collaboratively been looking at the results of those assessments. The second result was the establishment of an Internet site which is specifically focused on sharing the knowledge and information we have about disaster situations.

Another organisation we've been involved with a little bit longer is called NetHope (nethope.org). That's a 27-agency organisation, and it's now a separate NGO in its own right. It's looking at network solutions for charity organisations. The innovation there: if you sit with 27 organisations that have got worldwide interest in responding to humanitarian disasters, or disasters in nature conservancy, you can go out to the supply market as a buying club and say -we need satellite bandwidth and satellite dishes". We worked together with that group to go out to market and we've now got a supply arrangement.