Mention the Post PC era and you’ll probably kick off a boisterous debate about if it will ever happen and what gadgets will replace the PC. The arguments will likely mention the tablet and how they will/won’t totally replace the traditional PC. What you won’t hear is that the PC doesn’t have to be totally phased out, and that the Post PC era is already here.

Let’s face it, the traditional PC, and I include desktops and laptops running Windows, OS X, and Linux, will never completely go away. Even with the appearance of tablets, PCs will be in the workplace for the foreseeable future. They fit the function as well as they ever have and that’s not going to change.

Post PC is about lifestyles changing to largely exclude the PC, and that’s already happened.

It’s not the same outside the workplace. The vast majority of folks use something else to do the things they used to only do on a PC. This includes going on the web, using social media, and similar activities. Those are now done almost exclusively by most on smartphones and tablets. PCs don’t enter into the picture at all, and that’s the very definition of Post PC.

This is hard to argue against if you just look around you. You see people everywhere with a smartphone in hand walking down the street. They are surfing the web, checking Facebook, or similar functions. They are checking something on Google or using Google Maps to find something nearby. They are doing activities they only did on a PC not that long ago.

There will be those who don’t give up the traditional PC in their personal lives. They will continue to sit in front of a desktop or laptop and happily do things the way they always have. 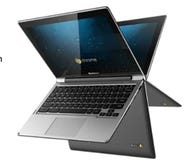 Post PC doesn’t mean all PCs have to disappear everywhere, just in most people’s lives, nor does one gadget type have to replace all PCs. It’s about lifestyles changing to largely exclude the PC, and that’s already happened.

Those arguing that the inability to do "real work" on non-PC devices, which some folks actually can, is not an issue. Post PC has nothing to do with work and everything to do with lifestyle changes.

While PCs will continue to rule the enterprise, this move away from the traditional PC at home is pushing into the workplace. The paradigm shift to non-PC devices is the force behind the bring your own device (BYOD) programs in the office. It’s the reason enterprises are deploying tablets. The big move away from the PC is the reason companies now routinely make other types of gadgets available to workers.

PCs don’t have to be totally replaced by other forms of computers to put us in a Post PC era. There only has to be a major shift in mindset in enough people for a profound change in the way the majority approaches tasks formerly done only on a traditional PC. And that shift has taken place, thus we are already in the Post PC era.