Continued from previous postThe X Files: New Documents Makes The World DifferencesSuch wise improvements for an application would be great spotlight, but Microsoft's totally new Office format (OOXML) for PowerPoint 2007 is not that satisfied to ensure widest compatibility of files. Certainly, Microsoft provides PowerPoint Viewer 2007 (Get it directly at http://www.
Written by W.Peterson on Jan. 23, 2008

Such wise improvements for an application would be great spotlight, but Microsoft's totally new Office format (OOXML) for PowerPoint 2007 is not that satisfied to ensure widest compatibility of files. Certainly, Microsoft provides PowerPoint Viewer 2007 (Get it directly at http://www.microsoft.com/downloads/details.aspx?FamilyID=048dc840-14e1-467d-8dca-19d2a8fd7485&displaylang=en). But most users don't just tend to watch and go. As they're still using previous versions of PowerPoint, new X format make the documents become untouchable files. The unfriendliness will scare some new officers away.

Also, Microsoft makes an Office Compatibility Pack for Word, Excel, and PowerPoint 2007 File Formats" (Go to find it at http://www.microsoft.com/downloads/details.aspx?FamilyId=941B3470-3AE9-4AEE-8F43-C6BB74CD1466&displaylang=en) to make up any inconveniences. But even so, the current situation is that, most PowerPoint 2007 users cannot edit the old non-X documents properly: wrong position, sprained objects and some loss.

The essential recommendation on this point is that you'd better transform the new PowerPoint 2007 files formats PPTX/PPSX to older vision files formats PPT/PPS before you take your presentation to anywhere else. Maybe you can always save your documents as non-X files to avoid some problems before PowerPoint 2007 is generally installed in most computers.

By the way, you can enable the Microsoft Office PowerPoint Compatibility Checker in PowerPoint 2007, and PowerPoint will prompt for those features in current presentation which are not supported by earlier versions of PowerPoint. Once continue to save, those unsupported contents will be removed or converted to static objects in older versions. This is the friendliest feature for compatibility as Microsoft has knew there're always some troubles definitely.

However, as the new ribbon tab rearranges the group of commands and features, it puzzles most upgraded users from previous versions. On the other side, the pretty ribbon takes much more system memories and other resources and may slow down your computer somehow. Therefore most people think the starting time is delayed in PowerPoint 2007 from previous versions. About the ribbon, I generally favor the idea that introduces more intuitive icons to click on. If you're really not filled with the tabs, just right click and "Minimize the Ribbon". 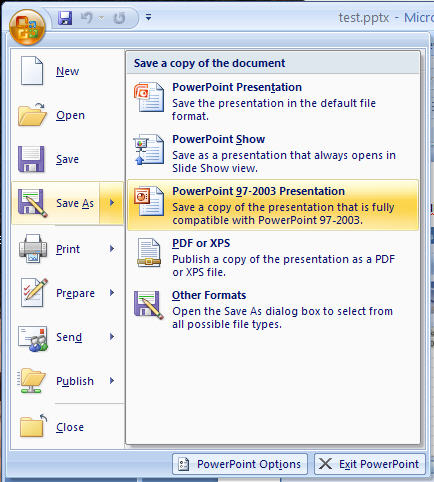