Recycle, trade-in, or keep: What to do with old tech gear

You can recycle, you can donate, you can try and get cash back, but first, you've got to decide what to give up.
Written by Tiernan Ray, Contributing Writer and  Elyse Betters Picaro, Senior Editor on Jan. 14, 2021 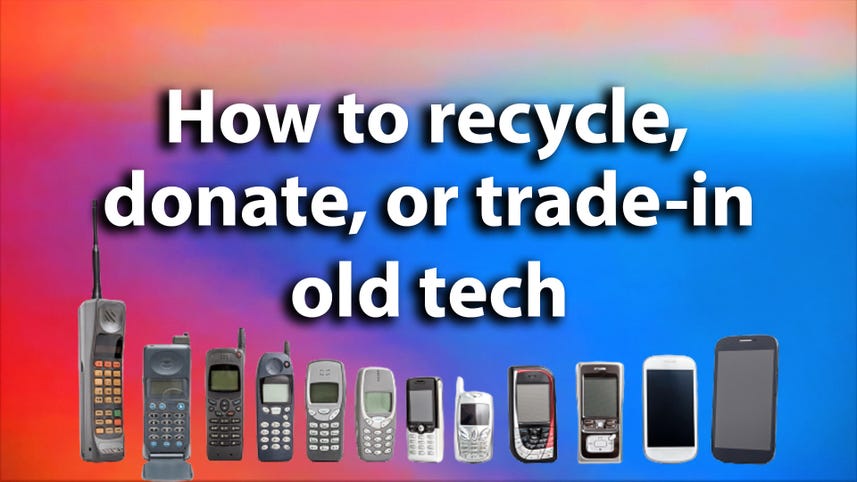 Every shiny new gadget will inevitably end up gathering dust in a drawer, its life force sapped by the obsolescence of its chips and software. You may find yourself with a bin full of items that were at one time thrilling but now just empty shells. Most wouldn't be too exciting to use if they even function at all anymore. This mortal coil, indeed.

What to do with old gadgets?

If you can part with any of your aging marvels, the first thing you should know is you'll get almost nothing for smartphones unless your device is from one of the big brands -- Apple, Google, or Samsung -- and it's of recent, vintage, or very good condition. That aging TLC, Asus, or Xiaomi phone? That Huawei gem from five years ago? Forget it.

Gazelle is the name most people know in cash offers, and it's focused on the big brands. The same goes for local merchants who trade in used gear. Anything other than recent popular phones, you may as well put it on eBay.

Another answer is a trade-in, where you hand in an old device as you buy a new phone, for a credit toward the purchase price. Verizon, AT&T, Sprint, and even Apple all offer trade-in programs. As do retailers like Best Buy and Staples. Whoever made the device could have an option, too. Samsung, HP, and Sony each have trade-in programs.

A lot of the trade-ins are limited in the same way that the cash sales are limited: It's got to be something recent and popular and in good shape. AT&T, for example, has a whole menu system to tell you what different brands and models of phones are worth. But most of them are worth zero dollars as far as AT&T is concerned.

For example, AT&T specifically states it will not give you a penny for a Virtu Constellation, a luxe phone from 2016. Nokia created the Virtu brand to sell hand-crafted phones with ruby ball bearings under the keys and Italian leather, and a concierge service similar to OnStar. The Constellation cost around $8,000 when it was new. But it won't get you nada as a trade in. You might be able to pawn some of the materials at the local jeweler if you can pry them loose from the phone.

In case you were wondering, if you are actually trading in something popular and recent, the value can be decent. AT&T will give you upward of $110 for a 256GB iPhone 8, for example, or $165 for a Galaxy Note 9.

If you can't get money, consider donating. An eye-opening idea comes from Takoma Park, Maryland-based Secure the Call. Any phone that can still power-up can be used to make a 911 call. Secure the Call will take any phone and give it to organizations that can get it to individuals who have no device so that those individuals can have a way to reach 911. It's a very simple way to help victims of domestic abuse, for example. A similar operation is run by the National Coalition Against Domestic Violence.

Your other very basic option, and it's a good one, will be to recycle. The non-profit organization Call2recycle, for example, which has been doing this for a quarter of a century, is keenly interested in anything with a battery. And cellphones are one of the easiest things to recycle, they point out. "We accept all types of cellphones and cellphone batteries regardless of size, make, model, or age," the organization says. Hey, even that Virtu Constellation can give back to society.

There are neat twists on recycling, such as Medic Mobile, a non-profit that builds community health systems in developing nations. They'll take any phone you send them and either refurbish and sell it, or recycle it, and use the proceeds to buy mobile technology that they can give to those communities to help with health care. Like Call2recycle, the company's warm embrace of old stuff is inspiring: "Millions of phones are thrown away each year—even more are hiding away in drawers. Give your phone new life and help communities around the world." Amen to that.

Medic Mobile is just one of many charitable organizations that will put proceeds of recycling to good use  Second Wave Recycling, for example, donates proceeds to various charitable efforts.

Some other recycling options are through major outfits such as Best Buy.

A time capsule of tech

Recycling is one thing or seeing how much cash you can get from places dedicated to buying new and used gear. And there are trade-in programs with carriers and even Apple. But, first, you have to face a moment of truth: Do you really want to dump all this stuff? Some of it is fascinating in what it says about its era, the fading memories it conjures, a time capsule of tech.

Google Glass from 2013 was too short on battery life to begin with; just thinking about charging it up for the thrill of taking pictures surreptitiously seems tedious. But the industrial design is still neat in a kind of cyber-punk way.

It's tempting to display it around the home as art, isn't it?

Then there is Peek's dedicated Twitter handheld. It had a pretty blue shell, but that keyboard? Just terrible. The software? Abysmally slow. How was it that every professional gadget reviewer in 2008 thought this was the greatest thing since sliced bread? True,  the idea of a Twitter handheld seemed fascinating.

Lenovo had the first phone with augmented reality, the Phab2 Pro, back in 2017. At 6.4 inches, the display seemed rather gigantic. Sadly, the few augmented reality demos for which you could use that display were not very interesting. Augmented reality still hasn't gone anywhere, but this experiment from the past is fascinating as a symbol of once high expectations.

How many smartwatches do you still have in the sock drawer? Still have that Pebble, the hottest app watch around at one time? How about the i'm Watch from the Italian design company of the same name, its chunky style screaming Italian chic? Or Qualcomm's prototype smartwatch? Just staring at these old timepieces will put you in mind of 2014, a kind of blissful summer of wearables before the Apple Watch arrived that fall and blew them all away.

There are reminders in that pile of all the empires that have crumbled, such as Palm's Pre smartphone, whose debut at CES in 2009 was a standing-room-only affair. It was sadly underpowered, but it had its loyal fans. And admit it, its user interface, the WebOS shell, still seems in retrospect so strange, so unusual, that you're almost tempted to power the thing up just to check it out one last time.

What will you part with?

As you reflect on these prospects, and you look back at the pile of gadgets that you've now spread out on your living room rug, that pesky question is bound to pop back into your head: What will you part with?

Google Glass is a piece of history. So is Pebble's watch. And Palm Pre. And Apple's iSight camera. They seem like more than recycling candidates. Any normal person probably wouldn't be interested in them. A normal person just wouldn't appreciate what's so cool about the fact each of them was momentarily the coolest thing in the world.

You may be tempted to form your own home museum. If that's the case, consider buying some floating shelves. You could put up a few shelves on one side of the living room, carefully arrange the devices on the shelves by color or by size or in chronological order. Make it your museum area. Some people have plaster tchotchkes, you have gadgets.

Or, if it's all too much, you could just stuff the Google Glass and the Pre back in a bag, stick the bag in the corner of your walk-in closet, and resolve that, next year, you will definitely figure out what to do with it all.

Android
How to get a tech job with no experience

Professional Development
NSA, CISA say: Don't block PowerShell, here's what to do instead