Google's Android has had something of an awkward start on tablet devices. Early devices, using versions of Android 2.
Written by First Take , Previews blog log-in on May 18, 2011

Google's Android has had something of an awkward start on tablet devices. Early devices, using versions of Android 2.x on larger screens, merely proved the dictum that phone operating systems didn't work when inflated to larger form factors. Android 3.0, a.k.a. Honeycomb, is Google's first true tablet OS, and it's taken nearly five months from its CES unveiling for the first devices to appear on the streets.

Motorola's Xoom was first, and the soon-to-be-launched Galaxy Tab 10.1 is Samsung's first venture into these larger form factors. Redesigned after the launch of Apple's iPad 2, the Galaxy Tab 10.1 that Google handed out to attendees at its I/O developer event is very different from the device Samsung demonstrated at MWC in February. A few months of redesign have resulted in a slimmed-down device — minus the SD card — and running on a different (but unnamed) dual-core ARM processor and with 32GB of flash memory. 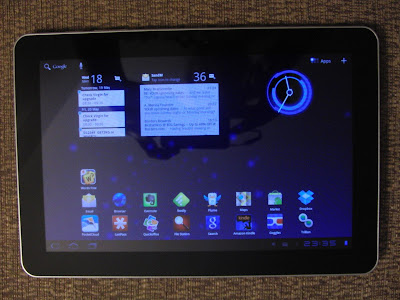 The Google I/O Special Edition boasts a white back, emblazoned with an army of marching androids. There's an Apple-like dock connector on one of the long sides, offering a combined synchronisation, power and video port. It's a custom connector, so you'll need to buy cables from Samsung. 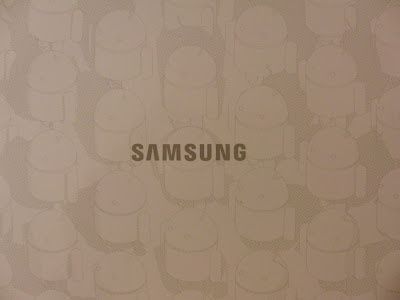 Compared to an iPad 2, the Galaxy Tab 10.1 comes in at the same thickness, but a few grams lighter. It feels a little heavier though, as the large battery gives the widescreen tablet quite some moment when held at one edge. We found the screen quality good, if a little too prone to fingerprints and marks. Sound quality is also good, and the tablet's two stereo speakers sit high on each side, neatly just above where you're most likely to hold the tablet.

Turn on the Galaxy Tab 10.1, and you're presented with a stock Honeycomb user interface, a pseudo-3D desktop where new screens rotate into view as you slide your finger from left to right. It's easy to use, mixing familiar Android ways of working with a set of simple swipes that slide you from screen to screen, holding to open up customisation tools. A gigabyte of RAM and a dual-core 1GHz processor make the tablet responsive, switching quickly between applications and with no slowdowns when background applications are still running. 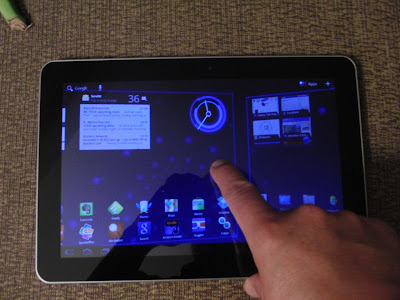 Battery life is good, and we've been able to carry the device around for a day with Wi-Fi on with very little drain — it's the large bright screen that's going to have the most effect on battery life, and Samsung's default power plan shuts the screen off very quickly. That's not a problem, although you'll find yourself occasionally forgetting just which way up the tablet is, scrabbling for the power button.

We're less impressed with the cameras. Samsung has given the Galaxy Tab both front and rear cameras, but the rear camera is now 3 megapixels rather than the original 8Mpixel unit. The front camera is a credible 2 megapixels, but we're not sure just how such a high resolution will play for video conferencing. We'd have preferred a higher-resolution rear camera and a lower-spec one on the front. 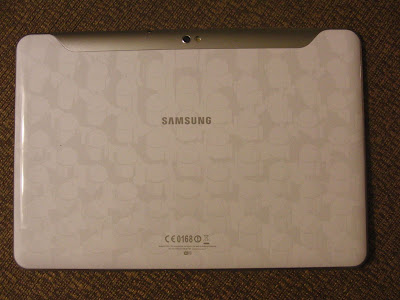 Tablet applications are starting to appear in the Android Market, and we found that most work well on the Samsung tablet's large screen. We've found that most applications (and Honeycomb itself) work best in landscape mode, with a few reader-like applications — Feedly, for example — taking advantage of portrait mode. You'll find the Galaxy Tab's accelerometer a little on the sensitive side, and it's easy to quickly flip the screen from one orientation to the next without intending to. Standard Android applications run reasonably well, although the screen scaling needed to fit on the tablet's large screen means unusual stretching in camera applications like Google Goggles.

Where we were disappointed was in the Honeycomb release of the Android Browser. Too many sites detected it as a mobile browser, delivering phone-optimised versions of sites that look terrible on a large screen tablet. The browser also crashed regularly, freezing and preventing us from scrolling pages. Hopefully this will be fixed by the upcoming Android 3.1 release.

We're pleasantly surprised by this iteration of Google’s Android 3.0, as many of the tablets we saw at CES were unimpressive. The Samsung Galaxy Tab may not have the software polish (or the app store bounty) of the Apple iPad, but it's a definite contender — and one that looks set to be the benchmark for the latest batch of Android tablets.