Netbooks are becoming increasingly sophisticated and nipping at the heels of low-cost notebooks. The Samsung N220 Plus, for example, costs around £300, which makes it rather more than an impulse buy. As a second computer, it really has to pay its way at that price.

With a small (10.1in.) screen and processor and other specifications that trail those of fully fledged notebooks, this might sound like a tall order. But if you can live with its features and don't mind working from a USB stick occasionally, then the Samsung N220 Plus, like other higher-end netbooks, is arguably a great purchase for the professional as well as the consumer.

Crucially, the Samsung N220 Plus has good battery life, which is a particularly endearing factor for the mobile professional. Samsung rates it for up to 13 hours of life from the standard 6-cell battery. 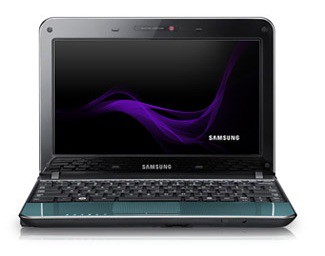 Windows 7 Starter Edition isn't perhaps the ideal version, but it's perfectly good enough for a bit of document editing and web browsing on the go. The small 10.1in. 1,024-by-600 pixel screen isn't the best for web browsing, but its non-reflective finish makes it much easier to use where there's a light source behind you (on a train, for example) than many netbooks with their reflective screens.

Importantly, the keyboard is very well made. Its isolated keys mean that you should be able to type accurately, even though the keyboard is a little cramped. And Samsung has made a good job of the trackpad: visually almost indistinguishable from the wrist rest thanks to its flat rather than recessed build, it's very responsive. Two solid buttons sit beneath the trackpad.

The build of the Samsung N220 Plus is robust, so that the netbook weighs a not insubstantial 1.32kg. The turquoise and black stippled lid and wrist rest of our review sample is staid enough not to disgrace a professional's travel bag. You can opt for a more vibrant red and black version if you prefer.

You won't want to push the Intel Atom N450 processor very hard, and the 1GB of RAM is minimal too. But the 250GB hard drive can store plenty of data if you need it to. Ports and connectors are limited, as they always are on netbooks, but arguably you get what you need for a bit of mobile working. There are three USB ports, headphone and microphone connectors, a VGA connector, a card reader, Ethernet, Bluetooth and Wi-Fi (802.11 b/g/n). There's also a webcam for video conferencing.

There's nothing particularly spectacular about the Samsung N220 Plus, which looks and feels like any number of other netbooks, but it's a great example of how far the format has come. We were once doubtful about this class of computer for mobile professionals, but now have to admit it has a place.