SAP plans to move its applications to its own Sybase-powered database platform and mix in a heavy dose of HANA in-memory technology. The game plan: Push long-time database partner Oracle out of the way and take a bigger chunk of the enterprise IT spending pie.

It's unclear how this adventure will turn out, but SAP has some cojones. SAP doesn't seem to mind that it'll alienate two long-time partners in Oracle and IBM. To be fair, those two compete with SAP on applications and business intelligence too. But SAP has the applications, Oracle has the databases and IBM installs everything. There's a lot of history there.

So what's going on here? This effort is more than just poking Oracle in the eye. SAP wants to control its own destiny a bit more. 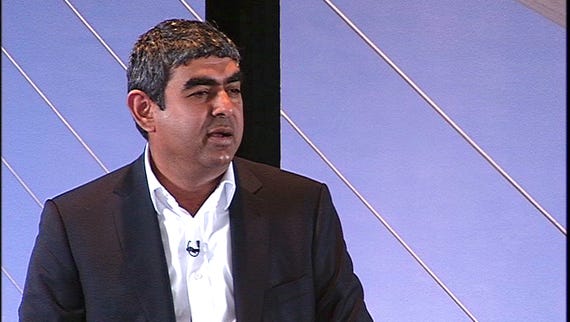 This decision marked SAP’s first step at taking back revenues from long-term database partners and emerging co-opetitors such as IBM, Microsoft and Oracle. Why? In cloud computing models, users don’t care nor ask what database the applications run on. They buy SLA’s that must be met by the software publisher. Will users care that a new database is in use? This will be SAP’s short-term challenge. In the long term, SAP will compete head on with its biggest database partners. Despite the conflict, database independence will result in greater revenue capture for SAP and flexibility in setting its future direction.

The big question here is whether SAP is up to the Oracle-killing task. Dennis Howlett and Jon Reed noted in a blog post that SAP has to seriously grow HANA revenue to compete with Oracle. In addition, Microsoft and its SQL Azure platform may be a bigger threat to both Oracle and SAP. Howlett and Reed said that they haven't found any customers planning a massive migration to SAP Sybase databases in the next three years. They add:

Technically, it is not a big deal to move the underlying database in an SAP landscape. That's not the point. The question comes in the extent to which a move from any other database will yield significant ROI/TCO in as risk free a manner as possible. Equally, companies have spent many years building stable financials/HR landscapes. They have the functionality needed and much else will be tweaking and bug fixing. Why would you disturb that and for what gain?

In order for HANA to be relevant, SAP has to execute flawlessly on two fronts: (1) Make both major inroads on new deals and replacements against RDBMS and data warehousing titans like Oracle, IBM and Teradata and (2) Compete effectively against substantially lower priced Analytics technology from new comers like Greenplum, Vertica and a whole host of extremely well-funded start ups. Unless SAP can accomplish both of these two very challenging goals, we believe HANA's destiny is little more than a footnote in SAP's financials.