Global warming, nuclear war, and asteroid hits. There are so many ways the world could end, but now NASA and the ESA are working on a trial to deflect would be Earth-shattering asteroids.
Written by Steven Vaughan-Nichols, Senior Contributing Editor on Sept. 4, 2019 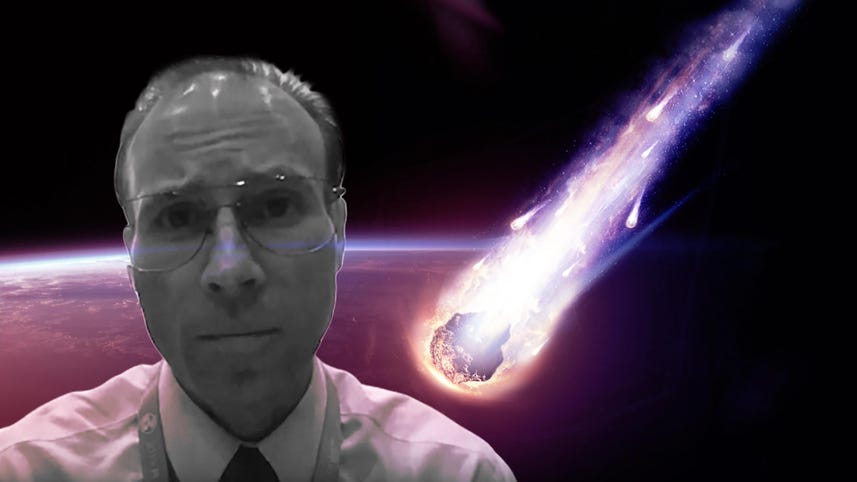 This past July, Asteroid 2019 NN3, a 747-sized, nickel-iron rock zoomed by Earth. It missed us. But we may not always be so lucky. Just ask the dinosaurs.

We've known for decades that asteroids pose a real and present threat. A space rock less than a third that size flew over the Russian town of Chelyabinsk in 2013, releasing half-a-megaton of energy above the city.

I have bad news for you: If 2019 NN3 or an even bigger killer comes along, we don't have a team of tough oil drillers, led by Bruce Willis, able to fly up in a space shuttle to land on it and blow it into pieces. Heck, we don't even have shuttles anymore.

But we are working on a way to deflect asteroids from Earth: Asteroid Impact and Deflection Assessment (AIDA). This experiment by the European Space Agency (ESA) and National Aeronautics and Space Administration (NASA) will attempt to deflect an asteroid by hitting it with refrigerator-sized spacecraft "capable of deflecting asteroids and prevent them from colliding with Earth."

This Double Asteroid Redirection Test (DART) program is being designed and managed by scientists at the Johns Hopkins Applied Physics Laboratory (APL). The goal of DART's "kinetic impactor technique" is not to blow an asteroid up but to knock it hard enough to make it shift orbit.

DART's target is Didymos. This is a twin asteroid system comprising of two orbiting asteroids. The first, Didymos A, is 780 meters in size, while its companion, Didymos B, is 160 meters of space rock.

The plan is to "shoot" Didymos B with DART. NASA will attempt to crash DART into Didymos B in September 2022 at speeds of just under 15,000 miles per hour, or about 6km per second. Simultaneously,  the ESA's accompanying LICIACube (Light Italian CubeSat for Imaging Asteroids) will video the results. After that, the ESA's Hera will arrive at Didymos in 2027 to observe the crash site.

In space, no one can hear you go bang, but it will be quite an impact. Earth-based astronomers should be able to see the hit.

We're in no immediate danger from Didymos. But the paired asteroids are classified as a near-Earth object (NEO) and are "potentially hazardous."

Thomas Statler, a member of NASA's Planetary Defense Coordination Office (PDCO) --yes, there is one-- and a DART Program Scientist said, "A binary asteroid is the perfect natural laboratory for this test. The fact that Didymos B is in orbit around Didymos A makes it easier to see the results of the impact, and ensures that the experiment doesn't change the orbit of the pair around the Sun."

We're a long way from Star Trek phasers or even The Expanse's railguns, but we are taking one small step closer to being able to defend our world from marauding asteroids.