Will I never learn?

Every so often a press release comes along announcing that some clever company has managed to enhance a watch so that it is a phone, a PDA, or sometimes, even a TV. I take the bait every time, and every time I am disappointed.

The most recent example is the sWaP Signature watchphone. (sWaP stands for Smart Watch and Phone). 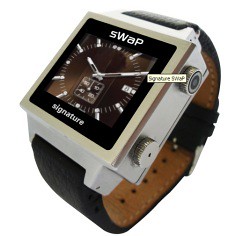 It looks OK in the photo, doesn’t it? And the specs are rather alluring too. They include:

The trouble is, the reality just doesn’t do the paper specs justice.

First off, the Signature is enormous and heavy. The watch weighs 124g, and even on the chunkiest of wrists it is going to look large.

Then there is the problem of getting data into the device. You have to use a miniature stylus and a couple of side buttons to fiddle around putting your contact book in there, making settings for the WAP browser (a very round the houses task), and so on. When you are set up, finding the contact numbers for people you want to call, and writing texts that you may want to send also require the stylus.

Prodding at tiny menu options on the 1.5-inch, 176 x 132 pixel screen with the teeny stylus that sits in the phone’s casing gets tedious after a very short time, and even the handwriting recognition system was only fun to use for the first half dozen characters.

The camera, whose lens is on the right side of the casing, did not seem to have a focussing tool so that images were incredibly blurred. Video playback was similarly blurry.

When it comes to making phone calls you have to either use a headset, and you get a Bluetooth one with the phone, or let everyone hear both sides of your conversation as you hold your wrist to an ear. It is, and you’ll have to trust me on this one, a look that gains more than one strange glance from fellow train passengers.

With a recommended price of £350 this is a very expensive toy. And when I can get a phone that can do all this, tell the time for more than one country, and do more for the same money, I have to wonder who on earth would buy this particular piece of kit.

Then again……… sWaP has just launched a ladies’ collection. And of course, I’ve asked to see a sample.