Telstra ditching Thanks scheme for Plus rewards store

Details are scant for the new program, and business customers need not apply.
Written by Chris Duckett on April 1, 2019 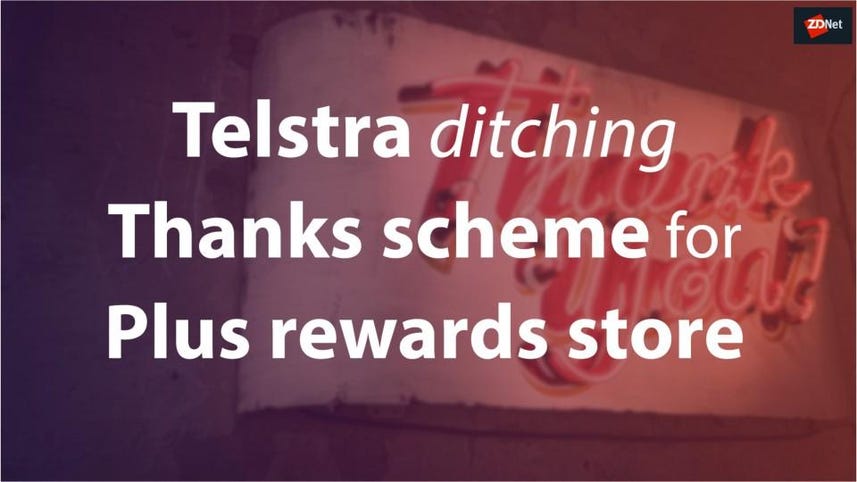 From the middle of May, Telstra will replace its Thanks rewards program for a new one named Plus.

Thanks is a program that allows Telstra customers to get discounts on movie and concert tickets, without being tied to how much the customer spends with the telco. Under the Plus program, higher spenders will receive more freebies.

Details on what is available with Plus are scant, with the telco only saying the program will allow for discounts on accessories and devices, in addition to the already-existing ticket discount angle. Plus will also introduce a points system of 10 points for every dollar spent, but it is unknown how many points will be needed to redeem anything.

Plus will also have tiers, with the base level called member, followed by customers that spend over AU$1,500 a year with the telco being called silver members, and those spending over AU$3,000 sitting in the gold tier. Gold members will get priority call handling and all day tech support, while silver members will be entitled to one Telstra Platinum tech support call.

Business customers on Telstra will not be eligible, with the telco saying it may launch a similar program aimed at enterprises in the future.

The telco said the new rewards arrangements are part of its Telstra2022 strategy, and flagged that it would unveil its long-touted simplified plans in June.

Last month, the telco also announced it was undertaking an upgrade and maintenance of its regional infrastructure.

"I understand the frustration this can cause, particularly where there are no other options. We are therefore expanding our regional maintenance plan further to address the primary sources of regional faults so we can provide a better, more reliable service for our customers," Telstra CEO Andy Penn said at the time.

"This includes the proactive repair of cable joints, which can be a common cause of faults in the regional network, migrating customers from less reliable networks using outdated technology to more reliable networks, and the pro-active replacement of batteries in exchanges."

The telco is repairing or replacing 1,000 cable joints and some cabling on the worst-performing cables; migrating 350 customers off its old high-capacity radio concentrator network onto NextG Wireless Local Loop telephone services; and replacing around 200 batteries in exchanges and roadside cabinets where mains power failures occur frequently.

For the fourth round of the federal government's mobile blackspot program, Telstra was assigned 31 base stations for deployment, and Optus 49, it was announced in March.

Telstra, Optus, and Vodafone fail to provide information to consumers with disability

According to an ACCAN research project, telcos failed to provide information about products catered for consumers with disability when reasonably required 50 percent of the time.

They believe a similar price structure will provide a more stable environment for access seekers as customers migrate to the NBN.

Submissions to the ACCC on its NBN rebate inquiry have shown that Vocus, Telstra, and Vodafone all have issues with the current wholesale service standards.