Sure, I get it, things change slowly in data centers, but there's a rapid change that's sweeping through data centers all over the world: The switch to solid state storage.

Notice that I didn't write, solid state drives, but I did write storage instead. There's a difference and what's about to happen will surprise just about everyone except storage professionals. (Hint: Your spinning disks and disk-like SSDs are going to be extinct soon, so don't be too sentimental or wax nostalgic over them.)

I think just everyone realizes that the move to SSDs is already underway in the data center. Traditional storage is replacing tape. SSDs are replacing traditional disks. And solid state storage will replace SSDs. 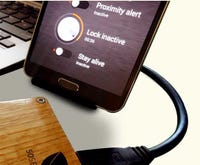 OK, I know a lot of you just decided that I'm full of radio tubes, but I'm not. Just as transistors (a solid state technology) replaced vacuum tubes, solid state storage will not only replace traditional storage (arrays of spinning disks), but it will also replace now traditional SSDs.

As the need for higher performance and more storage capacity increases for storage technology, manufacturers will have to meet those needs with faster, cheaper, larger storage units. Notice again that I didn't write the word drives. That's because what we now know as drive technology and drive footprint is about to become permanently extinct. It's already happening.

If you don't believe me, open your Chromebook and tell me what you see. Do you see a spinning disk? No. Do you see a 2.5-inch SATA or SAS SSD? Nope. What you see is part of the future: You see what's known as a M.2 "SSD". It's a tiny next generation form factor (NGFF) "disk" that holds your Chrome operating system and local files. And yes, it's even newer and cooler than the mini-SATA (mSATA) disks currently in use in some other laptops.

But the M.2, as new and cool as it is, is still not what's going to happen with storage in the longer term.

So, I know at this point you're screaming, "OK, great oracle of future storage, just what is it that's going to be the new storage normal?"

Sorry, as a person who doesn't necessarily appreciate journalistic style, I have a tendency to 'bury the lead' and write in a more novelesque manner, building to the climax rather than giving it all away at the beginning.

OK, OK, here it is: DIMM storage and "on board" storage

Now do you understand why I couldn't write, "disk" when referring to this type of storage? It is storage, but not disk in the traditional sense of the word. It also doesn't connect into the disk subsystem of a computer; it connects into the memory subsystem. Now, isn't that a more logical place for storage?

If you think about it, what we think of as storage is really just persistent, read-writeable, non-volatile memory. As memory, it should be on the memory bus. This placement means that it's logically closer to the CPU and delivers lower latency for access. SanDisk announced earlier this year, its new ULLtraDIMM SSDs.

And storage seems to be the last great bottleneck of enterprise computing, so decreasing access latency certainly seems the logical path to take.

The only better path would be to integrate storage right into the CPU itself—not as cache, but as actual addressable storage. I'm sure that someone will use the Comments section to inform me that such research is underway or that there are currently products available that do this.

My idea is to have a separate CPU or bank of CPUs that do nothing but manage storage. These CPUs would not be part of the computer's thinking capacity, but only part of the storage I/O story.

Future techno-archaeologists will find those old spinning disk-based drives and wonder how we ever managed to do the things we did with them—just as we do now looking back on MFM and RLL disk drives. The good ol' days. Not.

*OK, this might be TMI, but I really, really want a hood-mounted phaser on my car. Saving that, I'd take a grill port that fires photon torpedoes. 23rd century technology to solve 21st century road rage. I love technology.

Join Discussion for: The next data center dinosaur: Traditional...