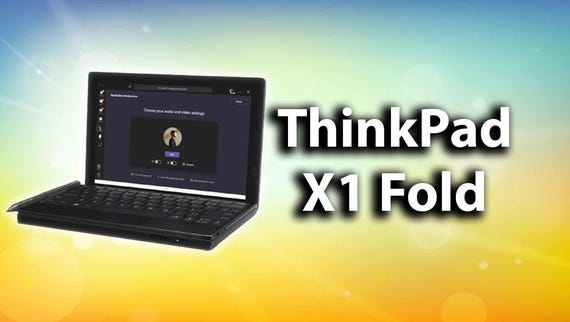 Long before Lenovo became its steward, the ThinkPad brand had a long history of twists on the classic clamshell. There was the famous ThinkPad 701c with the intriguing yet never-revived TrackWrite "butterfly" keyboard and the ThinkPad TransNote, an early experiment in bridging paper and pen computing. Legacies of both are present in the ThinkPad X1 Fold, the first PC from a major manufacturer to break the folding display gap with smartphones. Moreover, the Fold also extends some of the work since Lenovo took on the line, including the resonating Yoga 2-in-1 form factor pioneered by the company and the less popular dual-display Yoga Book featuring an E-Ink screen.

The first thing you notice about the Fold X1 versus, say the Galaxy Fold Z is the lack of any "handle with care" caveats. The Fold is, after all, a ThinkPad. While it's not a mil-spec rugged device, the thick casing and ample, raised bezels (which make swiping in a bit tricky) provide a reassuring degree of shock absorption. Indeed, unlike Samsung's folding phones, the X1 Fold not only supports stylus input but comes bundled with a stylus. (Alas, there's no fancy magnetic attaching or charging, just a pen loop on the keyboard.)

Beyond that, while the Fold X1 is not part of Lenovo's "Yoga Book" subbrand, the shape-shifting device may be the most book-inspired PC design ever. In contrast to phones like the Surface Duo and Galaxy Z Fold that have proven challenging to case design, the Fold X1 has a cleverly implemented leather exterior that slightly recedes when the device is folded. It includes an integrated landscape kickstand with some positioning flexibility, but not as much as the Surface's kickstand. (Much like the Surface's kickstand, it sort of works in portrait mode but is easy to tip over from even a tap.)

If the Yoga marked the start of the modern 2-in-1, the Fold seeks to usher in the era of the 3-in-1, encompassing a tablet, "desktop" and mini-clamshell, The kickstand is part of what enables the Fold X1's "desktop" mode, the most compelling of the X1's "poses." As I noted when I wrote about the Galaxy Z Fold's unfolded display, the X1 Fold's unfolded display is the product's strongest selling point.

While it may be "only" 13.3" inches, its unusually tall height in landscape mode (due to its 4:3 aspect ratio) combined with its vivid OLED output makes for an exceptionally wall-like computing experience from a device with such a small folded footprint. While the central crease can be felt while moving one's finger across the display, Lenovo has done a superb job of reducing its visibility, surpassing even the second-generation Galaxy Fold Z. One drawback of using the kickstand, though, is that one of the device's two USB-C connectors isn't readily available as it's on the bottom of the device in that pose.

The display's unfolded size and width in portrait mode also make for an expansive tablet experience that avoids much of the clunkiness of most convertible 2-in-1s that must contend with the rotated keyboard. The only popular option that comes close is the untethered upper deck of the Surface Book. However, the X1 Fold is thick and heavy compared to an iPad Pro or even Intel-based Surface Pro, much less the Surface Pro X.

As is the case for other folding devices, the X1 Fold's thickness becomes more pronounced when it is fully folded as the PC's display halves sandwich the bundled slim Bluetooth keyboard. The slim, non-backlit input device magnetically to the bottom half of the display for use as a mini-clamshell that gets high marks for comfortable use on one's lap. Lenovo includes simple software that allows you to specify whether its screen functions as a continuous or split surface, but the work area automatically shifts to the top of the screen when the keyboard is attached.

As Lenovo knows from its work with the Yoga Book line, new PC form factors are often made or broken by their keyboards and the X1 Fold's bundled Bluetooth keyboard is both its hero and goat. Using it while resting on or afore the Fold enables two of its most important modes. However, while its key travel is satisfying given its thinness and its reduced key size is manageable, the compromise needed to match the portrait width of the computer (about 85% of a standard keyboard width) relegates too many common characters to function key activation. These include the plus and minus/hyphen keys as well as the slash and question mark keys.

The relocations don't create the kind of steep learning curve posed by the Yoga Books but recalls the bad old days of netbook keyboards, complete with tiny trackpad. And while the mini-clamshell mode's airline half-tray suitability might be more appreciated once coach travel picks up again, anyone looking to do any more than on-the-go quick text composition would do well to bring along a more robust portable Bluetooth keyboard, such as Microsoft's folding affair I might also pair with the Surface Duo or even Lenovo's full-size TrackPoint Keyboard II, space permitting. Alternatively, if Lenovo has access to it, it may be time to dust off that TrackWrite keyboard patent or at least consider a tri-fold design like that on the Pomera DM30 writing appliance.

Lenovo also offers that its clamshell mode has value even without the keyboard, offering the ability to, for example, take written notes about a video that one may be watching on the upper half of the display. This was also a usage scenario also offered by the larger but abandoned (for now) Surface Neo.

One litmus test I have for devices with folding displays is whether they enable use of the product in scenarios where it would be impractical to take a more traditional competitive device. For the Galaxy Z Fold, that scenario would be rare. In the case of flip foldables such as the Motorola RAZR and Galaxy Z Flip, it might be more common. But for the ThinkPad Fold X1, there's no doubt. At about the footprint (if far from the thinness) of an iPad mini, it can easily fit into a small sling, pouch or handbag that would be far too small for something offering its screen size.

Given the already indulgent width of the display in portrait mode, it may be unrealistic to think the company could make it even wider; that would provide more room to squeeze in some of those common yet marginalized keys. (One alternative would be to fold the display on the longer axis and minimize the keyboard height by nixing the trackpad.) But for work that benefits from a large portable canvas that can be easily toted, the Fold X1 provides unmatched workstyle, and of course physical, flexibility.

Lenovo X1 Fold hands-on: A first step toward the next big thing in PCs
The first folding-screen PC to go on sale packs in a lot of genuinely useful ideas.

Surface Pro X and Microsoft's touchscreen reckoning
The Surface Pro X is Microsoft's best-ever tablet hardware. But touch app stagnation hampers it from making a stronger run at the iPad Pro today and threatens to limit the potential of the Surface Neo next year.