As Microsoft prepares once again to embrace ARM processors in the name of thinner and lighter computing devices, the Lenovo Yoga Book may be a hint of things to come. In some ways, the device -- available in Android and Windows versions and coming soon in a Chromebook variant -- represents a hybrid between the original Yoga and the original Surface. True to the Yoga lineage, it is a convertible clamshell that retains all the posing capabilities of the first Yoga.

However, Lenovo has addressed two of the most common complaints about such devices. First, that that they are thicker and heavier than pure slates and, second, that the keyboard looks and feels odd when serving as the back of a tablet.

Its prescription for both of these ills is the Halo Keyboard, a flat cover-like appendage connected via the company's watchband hinge. It's virtually blank when wrapped around the back of the screen but lights up and offers haptic and audible feedback by default when used in clamshell mode. In this way, the Halo picks up the mantle of the Surface's original Touch Cover. While that Microsoft accessory had a fabric-like texture, typing on the Halo Keyboard is more like typing on glass but with a bit more surface friction.

The keyboard also includes a trackpad section, but instead of it being indicated by an outline, it is indicated by five dots. Unfortunately, multitouch scrolling -- at least on the Android version -- does not work. Also, even though the keyboard is flat, there is no support for swipe-typing gestures. It would also be nice to see a cosmetic change to the Caps Lock key when activated.

Since the Yoga Book lacks a kickstand or full-sized USB port, its profile is thin indeed, about the thickness of an iPad Air and half the thickness of other Android tablets paired with clip-on keyboards. It's also much lighter than other convertibles and can be held comfortably and unobtrusively.

Typing on the Yoga Book looks futuristic, feels surprisingly comfortable (at least for a few hours at low volume) and is reasonably effective. However, without the anchoring of the fingers on certain keys, I found myself making far more typos than I did on a physical keyboard. Indeed, typing at my standard pace could result in a runaway string of typos if my fingers became misaligned. Slowing down helped out a bit as did using using the Yoga Book on a more stable surface. However, there were still a few trouble spots such as the right top row, letters that can get away from me on physical keyboards.

I imagine that with more practice, I'd become even more proficient and the greater discipline might even help when switching back to physical keyboards. Ultimately, typing on the Halo keyboard isn't superior from a tactile standpoint. However, the orientation of the keyboard and screen is much more comfortable for those who prefer clamshells, and the reclaiming of the keyboard real estate in landscape mode is a big plus.

The Yoga Book would be worth considering for mobility/input efficiency scenarios if that were all its bag of tricks held, but there is more. The Halo Keyboard can also be converted into a large digitizing surface with the press of a button on screen or the keyboard surface itself.

Lenovo's AnyPen technology, as its name implies, doesn't require any particular brand of stylus. In fact, it can even be used with ballpoints with a sheet of paper covering the keyboard surface. And also following the Surface Pro's lead, it allows quick note taking from the device's sleep state.

Current convertible designs have simply been too thick and awkward to see much use as tablets. As such, they've offered only marginal benefit over standard clamshells. The Yoga Book is neither the future of the tablet nor the future of the laptop. But as long as you want your operating system from Google or Microsoft, it's really the only clamshell that can compete with a tablet for mobility while offering a workable physical keyboard. 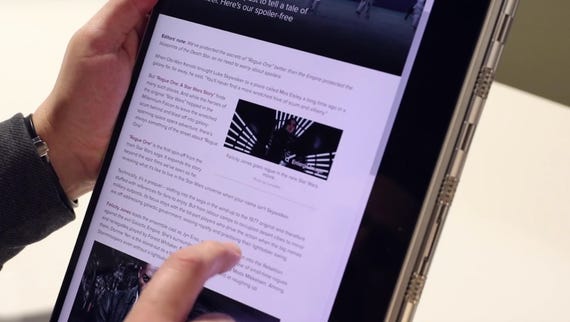 Join Discussion for: With Yoga Book, Lenovo has reinvented the...