Corning's Gorilla Glass provides a welcome degree of damage resistance for a critically important component in a portable computing device — the display. First seen in the original 2007 iPhone, it's now widely used in smartphones, tablets and other mobile devices —over a billion are now out there, according to the company. At CES in Las Vegas on Monday evening, Corning announced the third generation of its flagship product.

Gorilla Glass is an alkali-aluminosilicate glass that's chemically strengthened via a process called ion exchange: the untreated glass is immersed in hot molten salt at around 400°C, causing smaller sodium ions to be replaced by larger potassium ions; as the glass cools, a layer of compressive stress is formed on the surface that gives it increased resistance to scratches and drops. Gorilla Glass 2, unveiled at CES 2012, delivered the same damage resistance as its predecessor with a 20 percent reduction in thickness; the newly announced Gorilla Glass 3 is designed to resist scratches even better and retain more strength when it is scratched. Overall, Corning claims that Gorilla Glass 3 is three times more damage-resistant than its predecessor — a feature it's calling Native Damage Resistance (NDR).

A cautionary tale
Any improvement in durability will be welcome, because today's Gorilla Glass is by no means impregnable, as we recently found to our cost with a review sample of Google's LG-built  Nexus 4 . Perhaps presciently, we noted in the review that: "We've been carrying the Nexus 4 for a week or so, and found it pretty resistant to scratches and minor bumps. It's not suffered any drops from significant height onto hard surfaces, so we can't comment on its ability to withstand serious mistreatment".

Sure enough, within a couple of weeks of completing the review I managed to drop the Nexus 4 from about chest height onto a London Underground platform. The handset landed on its top right-hand edge, causing a small but significant area of cracking around the front-facing 1.3Mpixel camera:

I say 'significant' because although some screens with considerably more cracking damage continue working, the top half of ours refused to respond to the touch after its platform encounter, rendering the handset a 'brick'.

There are plenty of reports of cracked Nexus 4 screens — and backs, which (as in the related LG Optimus G) are also made of Gorilla Glass 2. So although Corning's glass is demonstrably more resistant to edge impact than conventional soda-lime silicate glass, there's clearly still some way to go before you can mishandle your phone with impunity. In the meantime, we recommend you buy yourself a bumper case, even if it means obscuring some of your smartphone's fancy design elements. 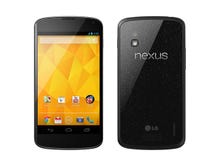 Scratching the surface
Having accidentally damaged the Nexus 4's original screen, we felt free to give its scratch-resistance a robust examination. Taking a sharp pair of scissors to the glass and pressing really quite hard produced no discernible disfigurement, which is impressive (you can see a similar test on this video). There are reports of screens picking up scratches, though, and this is almost certainly due to abrasion by harder-than-metal material such as sand or grit. If you're likely to get such material in your pocket, or you just want to keep your screen as clean as possible, consider investing in a screen protector as well.

Through the looking glass
Whether it'll be possible to create a glass that's hard enough to be scratch-proof and flexible enough to resist shattering under the most damaging edge impacts is debatable. Gorilla Glass emphasises the scratch-proof route, while another Corning product, Willow Glass (announced in June 2012) is primarily built for flexibility.

We'll be interested to see exactly what Gorilla Glass 3 brings to the smartphone table when it appears in shipping products later this year, but we're not expecting the bumper case industry to fold just yet.