Each iPad, which weighs less than 1.5 pounds, will replace approximately 38 pounds of paper on each United Continental flight.
Written by Larry Dignan, Contributing Editor on Aug. 22, 2011

United Continental said it will deploy 11,000 Apple iPads to its pilots in an effort to create a “paperless flight deck.”

In a statement, United Continental said that all pilots will get iPads. 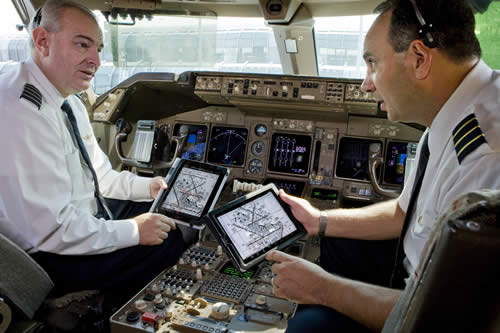 These electronic flight bags (EFBs) will replace flight manuals and deliver aeronautical navigation charts via an app. All pilots will have iPads by the end of the year.

The cost savings boil down to less weight and fuel consumption. There are some key green benefits too. United Continental said:

Each iPad, which weighs less than 1.5 pounds, will replace approximately 38 pounds of paper operating manuals, navigation charts, reference handbooks, flight checklists, logbooks and weather information in a pilot's flight bag. A conventional flight bag full of paper materials contains an average of 12,000 sheets of paper per pilot. The green benefits of moving to EFBs are two-fold—it significantly reduces paper use and printing, and, in turn, reduces fuel consumption. The airline projects EFBs will save nearly 16 million sheets of paper a year which is equivalent to more than 1,900 trees not cut down. Saving 326,000 gallons of jet fuel a year reduces greenhouse gas emissions by 3,208 metric tons.

The iPads feature the Jeppesen Mobile FliteDeck app. Jeppesen is a unit of Boeing and has delivered flight plans, navigation and other data to pilots via paper.

Jeppesen was an early adopter of Apple’s B2B App Store and previously said that the company would deliver custom apps via the iPad. Last month, Chris Kiley, Jeppesen senior manager of Web and mobile solutions, said Apple’s B2B App Store enabled “us to better manage specific app versions among a large customer base.”