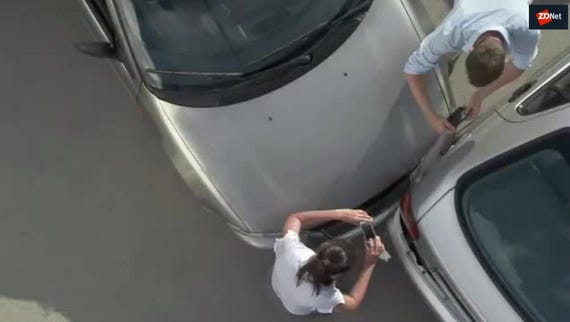 When two cars come together with a bump, for most drivers, there's a sinking feeling as they consider the stress and paperwork that faces them.

But for Brad Weisberg, Snapsheet's founder and CEO, a car accident was the source of an idea that grew into a business.

"Back in 2010 when I got in a car wreck," Weisberg told ZDNet, "I took my car to three different body shops and got three completely different estimates for the exact same thing.

"I was super-frustrated. It was time consuming to drive from body shop to body shop, and I noticed that at every shop I went to, all they were doing was just looking at my car from different angles."

In other words, the body shops were all doing more or less the same thing, but in three slightly different ways.

"I thought, why couldn't you just take photos from your smartphone and send them in and get estimates? There had got to be a better way to go through this process."

So Weisberg took his life savings, and built a website so that people could just put out requests to get estimates of the cost of repairing their vehicle.

The system would get 30 estimates within 24 hours, and the customer only had to choose which of the estimates they wanted to follow up on. The body shop would fix the car but otherwise the whole process was done digitally.

"We raised some seed funding and then we quickly learned that 90 percent of people who get their car repaired are going through insurance," he says.

The company decided to change focus, offering the system to insurance companies to help them streamline their systems and make the process of getting a repair done less stressful for customers, too.

"I soon realized that insurance carriers are all built on old, legacy systems," he says, so, "they have no white-glove, self-service user experience for their customers.

"I was able to take my technology, start up the company in 2012, change the name to Snapsheet and start building software and workflow management tools for insurance carriers."

The company has "close to" 50 insurance companies that it works with, including USAA, Liberty Mutual (which has also invested in the company), and The Hartford.

Last week, the company announced that it had teamed up with KeyBank, one of largest bank-based financial services companies in the US, to launch Snapsheet Transactions, a payment solution for insurance claims.

Instead of insurance carriers sending claimants a check in the mail once a claim is settled, Snapsheet Transactions offers carriers a payment hub for issuing claims and expense payments via a variety of payment options. This is done without adding complexity or risk to their back-end processes, the company says.

"Snapsheet Transactions' hybrid integration is flexible to insurance carriers' existing workflow and systems," the companies said in a joint statement. "Customers can choose between a web-based solution or direct integration through APIs. The configurable end-to-end payments solution can be implemented in fewer than 45 days and is tailored to a carriers' existing infrastructure, eliminating the need to update legacy systems."

Snapsheet now has around 400 employees and, Weisberg claims, has had 100 percent business growth year-over-year for the last four years.

While the company could branch out into different areas of insurance, Weisberg says that for now, it is staying focused on acquiring market share in the auto space and making certain that they "do this one thing, really, really well".

Read about insurance and IT

Join Discussion for: Using tech to take the stress out of a car...