Small Robot Company aims to take its crop-monitoring robot through to an initial production run, and beyond.
Written by Charles McLellan, Reviews editor on Feb. 7, 2020 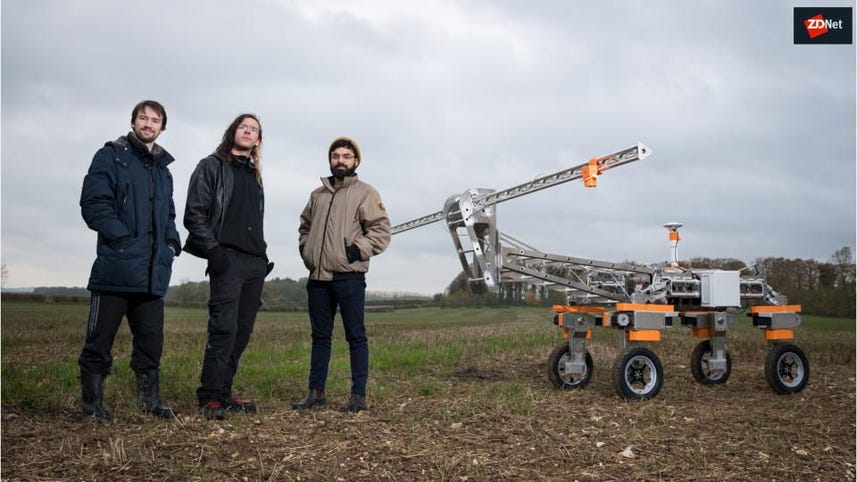 Small Robot Company (SRC), the UK-based agri-tech startup, has announced the next stage in the development of its crop-monitoring robot, called 'Tom'. The prototype design -- which is currently on trial at 20 farms around the UK, including the National Trust's Wimpole Estate and Waitrose's Leckford Estate -- will be 'finessed' in partnership with Tharsus, an OEDM based in Blyth, Northumberland.

SRC's Farming-as-a-Service (FaaS) business model is based around a trio of lightweight robots — Tom, Dick and Harry — that respectively monitor, feed/weed and seed arable crops, directed by an Ubuntu-based AI system called Wilma. Tom creates high-resolution 'per-plant' crop maps, which will enable Dick and Harry to carry out precision husbandry with minimal environmental impact. While Tom is heading for commercial launch in October 2020, the non-chemical weed-zapping service that Dick will deliver is still under development, with delivery scheduled for autumn 2021. The punch-planting Harry robot is even further away.

Tharsus is an Original Equipment Design & Manufacture (OEDM) service that specialises in helping clients create advanced machines and robots. A notable Tharsus project is Ocado's warehouse robots, which since going into manufacture in 2015 have gone on to sell in volume around the world. Another is the low-cost Eva Robotic Arm from Automata.

"We're super-excited to be working with SRC," John Toal, business development director at Tharsus told ZDNet. "They are solving one of the solvable problems in agri-tech, whereas a lot of people have focused on trying to pick fruit and stuff, which is difficult. Killing weeds is a good thing to do."

The synergy between SRC with its working prototype and Tharsus with its engineering and manufacturing capability is obvious, Toal said.

"SRC is very good at the AI and the 'how do I find the weed' thing, and we're a manufacturing company that makes electro-mechanical machines. We're getting close to the September deadline where they [SRC] want to have proper machines out in the field doing real work, so there's an urgency to make sure we're helping them through that process."

One of the tweaks that Tharsus expects to make to SRC's monitoring robot will help it handle a wider range of ground conditions -- important if it's to keep to its 20 hectares/day coverage target. "I think Tom needs a bit more power than he has today," Toal said. "It's fine on a dry field, but on a muddy field it needs a bit more 'oomph', and we're working on that."

SRC plans to service around 2,000 hectares of farmland with the 10-strong fleet of new Tom robots -- internally dubbed 'SuperTom' -- by January 2021. The next stage of the company's go-to-market strategy is to deliver weed detection (Tom) and non-chemical control (Dick) for 8,000ha of wheat crops in 2021. This will be scaled up by 2023 to 20,000ha, which is the area covered by the 70 UK farms that have signed up for SRC's FaaS offering. Beyond 2023, SRC plans to expand into the US and Canada, bringing the total coverage to 80,000ha. According to SRC, the global addressable market is 177 million arable farms totalling 6.2 billion hectares, so there's plenty to play for.

"We're also actively working to monetise other opportunities for the commercial Tom robot," said co-founder Sam Watson Jones in a statement. "There is already huge value in the technology we have today with Tom and Wilma. There are routes into other parts of the agri industry, including machinery companies, seed companies and chemical companies. This means we won't have to wait for non-chemical weeding to be developed before we can start growing our revenues."

SRC recently raised over £1 million on Crowdcube to get the non-chemical weeding robot, Dick, to the field trial stage, and to fund the initial fleet of Tom robots. This campaign reached its initial £700,000 target in two days, and racked up £560,000 within minutes of going live.

Speaking to ZDNet, SRC's head of robot awesomeness Joe Allnutt elaborated on the partnership with Tharsus.

"We've been working with Tharsus for a few months now, and talk to them about once a week. Lots of things need to happen before the robots roll off a limited production run in October. We had a meeting this week, for example, about which safety regulations apply to autonomous agricultural robots — the answer is, there isn't mature regulation around what needs to be done, so we're trying to find our way through that! We have a SuperTom robot out in the field, collecting data on a small number of farms that are paying for the service. With Tharsus we can turn what is a prototype -- of sorts, even though it's delivering a paid-for service -- into something that can be produced at a larger scale, both for the initial fleet in October through to our aspirations for hundreds or thousands of similar robots in the future. We're really pleased to be working with Tharsus: they're the experts -- everybody knows about Ocado, they were our first choice, and we were delighted when they were so positive about working with us."

At a time when uncertainty surrounding Brexit often raises questions around hiring, supply chains and the UK's international standing, John Toal is bullish about the home-grown robotics industry, and Tharsus in particular.

"We're winning awards all over the place, we'll get close to £80 million revenue this year, and we'll employ another 120 people over the next 12 months, taking us close to 500 in Blyth by the end of the year. Fortunately our supply chain is a nice long one, and we're not seeing any resistance from our international customers. We also have two great universities down the road: Newcastle and Northumbria have 50,000 students and good engineering faculties, and so far, we've not had a problem finding really good people."

SRC's Joe Allnutt signs off by acknowledging "the public and the farmers, especially" who contributed to SRC's recent crowdfunding campaigns.

"Last year it meant we could go from a few people in a shared office space to having our own premises and our own equipment and tools, to get us there for that first robot. This year it's going to enable us to take the next step along the line and engage with Tharsus to turn our working prototype into something that's scaled out to be a proper viable business."

Mobility
How to install Linux applications from the command line