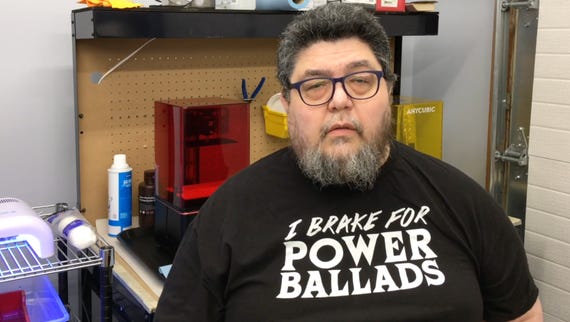 Why are my 3D prints melting?
Watch Now

There was nasty gray sludge on the shelf, under a 3D print of a chess rook. It was not the way I wanted to end a long day.

The rook was one of the first prints I generated on the original Elegoo Mars printer. I reviewed it last year. The rook is the sample print that comes with the printer. All you have to do is fill the printer's vat with resin, insert a thumb drive, select the rook, and hit print.

That rook model is probably one of the most popular, most printed 3D prints of all time. That's why I'm particularly surprised it's the one that turned into goo. After all, the model was designed by pros, the slicing settings were presumably optimal for the printer, and the prints that melted were produced 14 months ago.

Also: Hands on with resin 3D printers: We put the Elegoo Mars, Mars Pro, and Zortrax Inspire to the test

As the accompanying video shows, one or more rooks (there are four on the shelf) either began melting or oozing very toxic resin all over my shelf. But why?

I have a few possible ideas. My first theory is that the heat of the shelf (there's a light under it) caused the resin to melt. But I can easily debunk that by observing the LED light produces almost no heat, and certainly none that reaches the shelf.

The second possibility is the heat of the room. But it's winter (or was when I filmed this), so the room is usually kept at 64 degrees, and the lights are also LED, which generate virtually no heat.

A very distant possibility is that the paint on the shelf interacted with the resin in some way. I find that really doubtful because that shelf is eight or nine years old, and would have cured pretty completely in that time period. But there could be, I guess, some chemical that interacts with the resin.

I don't think that's the case, because when I cleaned the gray resin off the black shelf, the sludge on the paper towel was the same gray as the resin. There were no black streaks or anything that indicated any of the surface coating on the shelves had deteriorated.

My final thought is that there was liquid resin inside of the rooks, and the resin had always been there. Presumably, this means that every rook ever printed still contains uncured, toxic resin inside. There's a happy time bomb waiting to happen.

If that's the case, what about all the other resin prints? You need to put holes in the prints so the resin inside leaks out, but how well are the innards of the prints really cured, and how much resin is stored in little pockets inside the prints? Given that resin printers are often used to produce gaming miniatures, presumably some used by children, it's actually quite possible that millions of unsafe little gaming objects are out there, ready to explode in toxicity.

I will clearly follow this up, hopefully with better answers. Until then, if you know what caused this mess, please leave comments below. Have you ever had your resin prints melt or explode? Let us know.

Join Discussion for: Well, this is disturbing: My resin 3D prints...