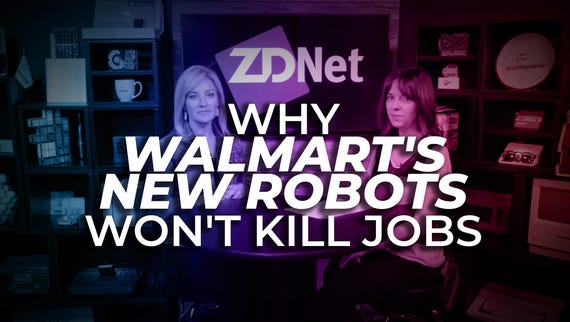 Since the dawn of the self-checkout, automation in retail has sparked anxiety and spread fear over an impending robotic takeover and the fate of human workers. Those fears were stoked again this week when retail giant Walmart announced that it was adding thousands of new robots to its stores nationwide. But a closer look at Walmart's announcement suggests that its robotics push is less of a job killer and more so a response to its own digital operations.

As for Walmart's exact robotic plans, the retailer says it will add 1,500 new autonomous floor cleaners, 300 more shelf scanners, 1,200 additional FAST Unloaders, and 900 new Pickup Towers to its US stores. Many of these systems have been in testing throughout select Walmart stores since 2017, meaning that this isn't necessarily a new endeavor for Walmart as it is a broader deployment of an existing program.

Nonetheless, any time a retailer or large employer rolls out a system for automation, the immediate reaction from some segments of society is that these systems are going to take jobs away from real people and that automation is the single greatest threat to the human labor force. While there is truth to that argument as it relates to the broader economy, in Walmart's case, the robotics push rhymes more with the digitalization of commerce than it does with job cuts and cost savings.

As more shopping takes place online, and competition with Amazon persists, Walmart is tasked with implementing smart stores practices that shore up inefficiencies and offer consumers a more compelling, unified experience. These robotic systems aim to do just that, while also providing Walmart with highly detailed and actionable data that it can use to better run both its online and physical stores.

For instance, the retailer's shelf-scanning robot -- dubbed the Auto-S -- collects upwards of 20GB of image data per aisle. That data is stitched together into a panorama, sent to the cloud, and run through proprietary AI to help store associates understand what is on the shelf, what is missing, and at what location. The AI sees every product and every label, and reads its content and locates it.

"We give retailers the confidence to tell shoppers online that yes, we do have that inventory, come and pick it up," said Sarjoun Skaff, CTO of Bossa Nova, the robotics company behind the shelf-scanning Auto-S. "Whereas today, if a retailer has only a few items in inventory, it will actually say zero online just because there's no certainty whether that item is in the store."

That shelf-level data is also shared with the Fast Unloader, the inventory sorting system, which uses the out-of-stock information to prioritize what products need to be unloaded, sorted and restocked on shelves.

When it comes to its employees, Walmart maintains that its use of robotics isn't a ploy to cut costs associated with a human workforce. Instead, Walmart insists that automation is meant to relieve workers from the boredom that comes with doing repeatable, predictable and manual tasks.

Walmart said through a spokesperson that the tasks being automated are generally positions that are harder to find, hire and retain people to do.

"As we've started changing the job to take out some of that routine work, it's becoming easier to find people to do those jobs," the company spokesperson said.

What's more, Walmart said that the company is actually adding new jobs as store operations evolve. In the last year and half, Walmart has added 40,000 new jobs for the online grocery picking roll. These jobs -- in which a human worker assembles online grocery orders for customers -- did not exist before Walmart entered the online grocery space.

"What we're seeing so far suggests investments in store technology are shaping how we think about turnover and hours," said Walmart's spokesperson. "The technology is automating pieces of work or tasks, rather than entire jobs. As that's happening, we have been able to use many of the hours being saved in other areas of the store -- focused more on service and selling for customers. The result so far: we've seen our US store associate turnover reduced year-over-year. We expect -- and are actively managing -- to also absorb any reduced hours through attrition. We think that's a good approach for our associates and the customers they serve."

Join Discussion for: Why Walmart's robot army won't be a job killer