The new Spectre x360 represents HP's efforts to perfect the mobility of the first generation of the convertible laptop, which offered a solid if slightly heavy non-Surface Windows answer to the MacBook.

See also: Get ready for a MacBook Pro and MacBook Air refresh

HP has shaved 10mm from the bezel on each side of the screen to deliver its "near zero border" 13.3-inch touch display in the updated model. The overhauled Spectre x360 retains the aluminum finish and curves of its predecessor, but at 13.88mm thick and weighing 2.85lb (1.29kg), it is 13 percent slimmer and 11 percent lighter. 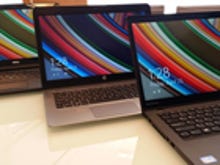 Time for a second look at business laptops

Smartphones and tablets aren’t the only gadgets getting thinner and lighter. If you’ve put off upgrading your business notebook, it’s time for another look. The three 14-inch models I've been testing show the business laptop has come a long way.

In spite of the weight drop, the new model packs a larger 57.8W battery, which along with fine-tuning for Intel's Kaby Lake processors will offer up to 15 hours of battery life, according to HP.

It has also added an infrared camera to the device, bringing support for Microsoft's Windows 10 Hello facial login. Dual-array mics have also been optimized to support Cortana's voice-control features, while there are now four rather than two speakers.

The laptop also features a backlit keyboard, two USB-Type C ports with Thunderbolt 3 support and one USB-Type A 3.0 port.

The refreshed 13.3-inch ENVY laptop is a handsome piece of hardware in a metal finish, but lacks the finer trimmings of the Spectre x360. It's also $200 cheaper.

At 14mm thick and weighing 3.15lbs, the ENVY is now actually thicker and heavier than its predecessor but, perhaps offsetting this, a bigger battery offers up to 14 hours of battery life, equal to four more hours.

It features dual speakers, a backlit keyboard, two USB 3.0 ports, and one USB Type-C port. The laptop will be available with new generation Intel Core i5 or i7 processors, up to 1TB solid state storage, and up to 16GB RAM. It will also be available with a QHD display, if customers want to add touch.

And, just ahead of Microsoft's rumored Surface all-in-one launch in the next fortnight, HP has introduced its ENVY all-in-one with a 27-inch QHD display. Its camera with IR support also enables Windows Hello. This will be available in October, starting at $1,299.99, with up to 256 GB solid state storage or a two terabyte hard disk and sixth-generation Intel i5 or i7 quad-core processors.

Read more about the latest laptops