If you're just on your way to your local Apple Store to pick up a new MacBook, then you might want to wait a few weeks -- a refresh of the MacBook Air and MacBook Pro lineup seems imminent. 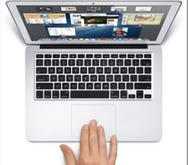 Since Apple didn't announce any new MacBooks at the iPhone 7 launch event, analysts are now expecting that Apple will unveil new laptops before the month is out.

See also: Google destroys the Android fan myth that the iPhone is too expensive

On the MacBook Pro front (which is in serious need of a revamp considering that the last major redesign happened back in June 2012), aside from giving it a much-needed processor and graphics boost, the other big updates are expected to include:

OK, so what about the MacBook Air?

However, dropping the 11-inch MacBook Air would mean eliminating a low-cost Mac for those wanting to enter the macOS ecosystem.

It has also been suggested that Apple could introduce a 13-inch MacBook Air.

But it doesn't seem that the MacBook Air is going anywhere yet, and the latest leaks and supply chain chatter points to this being more of a refresh than a total redesign: