ZTE's first Firefox OS devices available to US and UK buyers sold over the weekend.

Last Friday, the Chinese smartphone maker began selling its ZTE Open device on its eBay store in the US for $80 and £60 in the UK. By Monday, the device had sold out, according to its eBay pages. 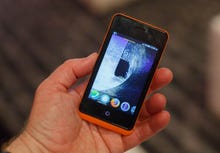 New Firefox OS to be released every three months Mozilla has announced a quarterly release schedule for its mobile OS, with security updates in between.

That the devices sold out in the UK and US might be as sign of success, but for now, fewer than 1,000 buyers in each market were able to get their hands on the device. According to its US and UK eBay pages, just 990 were sold in the UK while 985 were shifted in the US.

The ZTE's low-end price is shows in its specs , which offer a 3.5-inch multitouch screen, a three-megapixel forward-facing camera, 512MB storage and 256MB RAM, and a single-core 1GHz processor from Qualcomm.

With carriers in the US and UK have yet to announce support for any device running Firefox OS, the ZTE Open comes unlocked.

ZTE launched its Firefox OS device with operator Telefonica in Spain in July, and in Venezuela and Colombia the following month , while last week's US and UK independent launch extended availability of the affordable phone globally.

Deutsche Telekom has released Alcatel's One Touch Fire Firefox OS in Poland , with Greece and Hungary next on the list. Norwegian operator Telenor also plans to launch a Firefox OS phone to customers on their networks in Central and Eastern Europe this year.

Meanwhile, Spain-based Geeksphone, which made the Keon and Peak Firefox OS for developers, has also released a follow-up called Peak+ , which carries slightly more powerful hardware than its predecessor, the original Peak.

Join Discussion for: ZTE's Firefox OS sells out in the US and...