Twelve UK cities including Cambridge, Brighton and Aberdeen will receive funding for new ultra-fast broadband networks capable of delivering download speeds of up to 100Mbps. 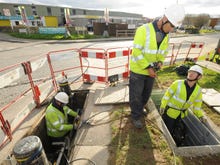 330Mbps prices to fall as BT cuts fibre-to-the-premises wholesale fees Many businesses should be able to get full-fat fibre connectivity for a lower price as of next year, when BT Openreach will cut its wholesale pricing for FTTP-enabled areas and introduce its FTTP-on-demand option, also at the lower cost.

The announcement, made on Thursday by chancellor George Osborne in his Autumn Statement, confirmed plans - first outlined in 2011 - to invest in the networking infrastructure  of smaller cities.

"By offering high-tech and digital companies the infrastructure they need, they will be able to compete for business, investment and jobs with the world's top digital cities," a spokesman for the Department for Culture, Media and Sport (DCMS) said in a statement.

The 12 cities that will split the £50m of funding are Brighton and Hove, Cambridge, Coventry, Derby, Oxford, Portsmouth, Salford, and York in England; Aberdeen and Perth in Scotland; Newport in Wales; and Derry/Londonderry in Northern Ireland. The amount of funding for each city will be announced at a later date, the DCMS said.

The scheme is the second phase of the government's super-connected cities plan, which aims to give businesses and residents access to ultra-fast connectivity before the end of 2015. The first phase of the plan saw £100m allocated to 10 larger cities , which included the four capitals of the UK.

Both ultra-fast city funds come under the government's umbrella of ongoing investment via its Broadband Delivery UK (BDUK) scheme, which sees the lion's share of the total £680m investment going towards improving broadband connectivity in more rural areas that often have sub-standard internet connectivity.

"The new investment will help put these cities at the centre of the digital stage" — Maria Miller, culture secretary

"Fast broadband is essential for growth and the creation of jobs. We have made significant progress with our broadband programme over the last few months, cutting through EU red tape and that continues ," culture secretary Maria Miller said in a statement. "The new investment will help put these cities at the centre of the digital stage, competing for jobs and investment and supporting Britain in the global race."

The BDUK scheme aims to deliver a minimum of 2Mbps for everyone in the country by 2015, with 90 percent of the population also getting access to super-fast speeds (25Mbps or faster, as defined by the DCMS) within the same time frame.

These goals also sit within the wider broadband aims of the EU Digital Agenda, which include reaching 50-percent uptake of 100Mbps or faster broadband by 2020, and a minimum download speed of 30Mbps for all European residents by 2020.