12% of NSW drivers opted for digital licence in first week

The digital licence is setting the scene for the future of identity, as Minister Dominello seeks to make Marie Kondo happy.
Written by Asha Barbaschow on Nov. 5, 2019 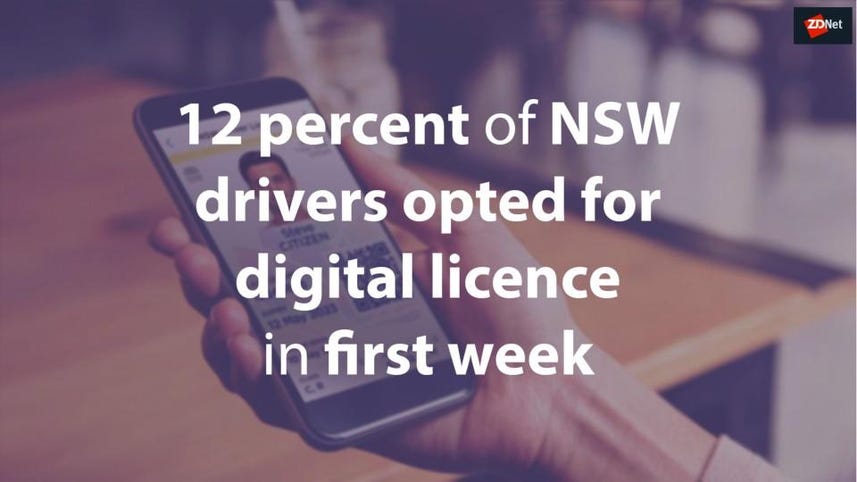 The New South Wales government quietly released a digital version of a type of driver licence last week, allowing citizens to show an app-based copy of their licence in lieu of a physical card.

The Digital Driver Licence is available through the Service NSW app, and despite teething issues with the app being unable to handle the number of people turning to a phone-based option at launch, more than 680,000 people have opted into the service within a week.

This represents 12% of those with a driver licence in NSW.

"But not only have we had extraordinary levels of adoption within a very short compass, our feedback is remarkable: Of the 72,000 people who have given us feedback, 97% have given it the thumbs up," Dominello said on Wednesday.

"Think of it like concentric rings in a tree. We've started with permission to drive. The next ring, signing into a club. Next, ring after that, proof of age to get into a pub. After that, perhaps proving your ID at the airport when you're checking in for a domestic flight or providing a copy of your ID when you're on holiday, renting a car," he said.

"There is a broad and growing ecosystem for potential uses for the digital driver's licence and we want to proactively support that ecosystem to work at the same pace so they can also accept the DDL."

Users can already add a fishing licence, boat licence, or RSA -- Dominello said trade licences are next on the list and will be delivered next year.

But the future is not just licences and Dominello said he wants to prepare for that future now.

"To make Marie Kondo happy -- and I want to make her happy -- not only will we harmonise, we will synthesise."

He said in the future it would be known as an opt-in, multipurpose NSW Licence that shows permission to drive, permission to work with children, permission to sell alcohol, and so on, but it would also follow the "tell government once" play.

"When your details change, you can tell government once and subject to your express consent, your details will be updated with every agency you grant permission to. In this way, when you apply for an additional permit from government to undertake a given activity, your details are filled automatically," Dominello explained.

"We have an ambitious plan to significantly improve customer service for individuals and businesses alike, through the tell us once prism."

Discussions are also underway to have interstate acceptance of the digital licence.

Security and a bug bounty program

Expanding on the privacy and security within the app, Dominello said the Service NSW app does not access any personal information on a user's phone. Nor does it track, store, or share location.

"However, if you show your driver's licence -- whether it is plastic or digital -- to someone else for the purposes of entering a venue, or collecting a parcel, or any other activity, you would need to understand the privacy settings of that third party," he said.

"I am a very strong advocate for the use of technology and data to improve our world, but we must make sure that privacy keeps pace."

In order to access the licence, the Service NSW app is protected by a user's passcode, fingerprint, or face ID. If the user loses their phone, they can log into another device and retrieve it.

The licence has a moving watermark-like element in the background to prove it is not a screenshot. The Service NSW app, however, allows for a screen recording to be conducted.

"We take cybersecurity very seriously in New South Wales. The digital licence has been through multiple rounds of security testing and audits, including by our own Cyber Security NSW team," Dominello said.

As part of the development of the digital licence, Service NSW has also launched a bug bounty program.

"This allows independent security experts to get hands on with the underlying code and get rewarded for finding areas where the security of our platforms can be further improved," the minister said.

"Bug bounties are commonplace in the technology industry and this is one of the first examples of a state government collaborating with the cybersecurity industry in this way."

The minister told ZDNet that a bug bounty program will be the future for product development out of Service NSW.