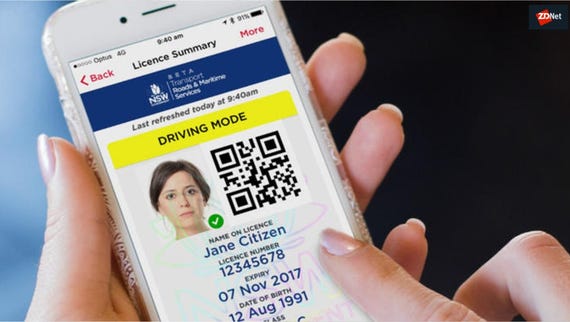 Driver licence holders in New South Wales (NSW) can expect to have access to a digital version of their licences -- displayed via smartphone -- after the next state election, which is scheduled for March 23, 2019.

Minister for Finance, Services and Property Victor Dominello revealed during the launch of the state government's Digital Design System on Tuesday that the rollout of digital driver licences is slated for all of NSW following the successful trials in Sydney.

The metro trial of the digital driver licence began in November across Sydney's Eastern Beaches, allowing more than 140,000 licence holders in the region to ditch the plastic identification card for a smartphone-rendered copy, available via the Service NSW app.

The trial expanded to Dubbo late last year, allowing participants to use their digital driver licence for proof-of-identity and proof-of-age to gain entry into pubs and clubs, as well as for roadside police checks.

Dominello on Tuesday said the Service NSW app is ready for a state-wide rollout.

"It has been rebuilt and redesigned to be faster, easier to use, more secure, and house the next generation of digital services such as the digital driver's licence," he explained.

"Service NSW has ensured that the app that hosts the [digital drivers licence] uses contemporary technology and of course features robust security."

Such contemporary technology includes blockchain, with Australian data security company Secure Logic revealing in September its platform is used to underpin the digital driver licence, and will enable the state-wide rollout of the digital identification play, with its tech having been used in both the Dubbo and Eastern Beaches trials.

The digital driver licence trial follows the passage of legislation earlier this year which enabled the state-wide rollout of the technology.

Amendments to the Road Transport Act 2013, the Photo Card Act 2005, the Gaming and Liquor Administration Act 2007, and the Liquor Act 2007 provide drivers the option to use their digital licence in place of the physical card for proof-of-identity and proof-of-age purposes.

The state government made the first wave of its digital licences available through the "My Licences" digital wallet in the Service NSW app in late 2016, with the app enabling NSW residents to renew their licences and update their details without needing to visit a Service NSW centre.

The digital driver's licence will join the recreational fishing, responsible service of alcohol, and responsible conduct of gambling competency cards in the digital wallet. NSW residents are already able to renew their driver's licence and view, pay, and contest infringement notices via the Service NSW smartphone app.

South Australians have had the option to hold digital driver's licences on their phones since September 2017.

"Seriously, abandon ship and look at what we're doing because your citizens aren't going to be happy with it ... what we've got is pretty good," he said on Tuesday.

"There's so many checks and balances in it, so many security features, it's going to put us in a very good position for the long haul.

"The digital drivers licence in many ways is a keystone of many of the reforms that we're going to do around digital transformation."

Queenslanders could be next to get digital driver's licence

Microsoft and Accenture have partnered to create a blockchain solution that acts as digital identification for refugees. Here's how it works.