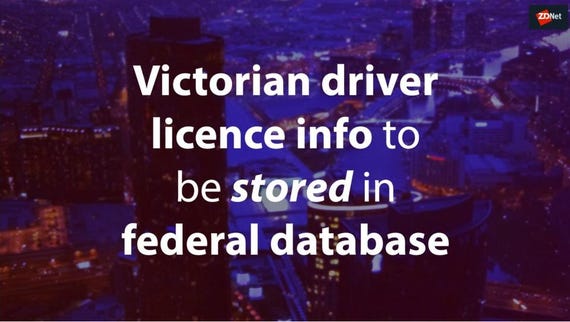 The Victorian government will be uploading driver's licence data to the federal government's National Driver Licence Facial Recognition Solution (NDLFRS), in a bid to crack down on identity fraud.

The state has touted the move will improve the way VicRoads and Victoria Police monitor for fraudulent or duplicate IDs.

"The upload will make it easier for authorised government agencies to identify fake licences or multiples IDs connected to a single individual and stop potential fraud," a statement from Special Minister of State Gavin Jennings said.

According to Jennings, current image-based identification methods are "cumbersome", and the sharing of information between agencies takes days to process.

"This agreement will help get dangerous drivers off our roads by reducing the chance of people using multiple licences to avoid demerit points or licence cancellations," the statement continued.

Victoria has agreed only to upload the data to the system and make it available to other Victorian-based government agencies.

Any further use by federal authorities or other states will not be authorised until Victoria is satisfied with the proposed Identity-matching Services Bill, which is currently before federal Parliament.

The Bill authorises the Department of Home Affairs to operate the central photo-matching hub for communication between agencies, allowing for the collection, use, and disclosure of identification information to provide identity matching services that employ facial biometric matching.

The use of facial biometric matching, the government says, is for the purposes of fraud prevention, law enforcement, national security, and related activities.

Victorian participation, Jennings said, will be monitored to ensure the privacy of individuals are not compromised.

The state's vow to take the privacy of citizens seriously follows Public Transport Victoria (PTV) last month being found in breach of the Privacy and Data Protection Act 2014 (PDP Act) by the Office of the Victorian Information Commissioner (OVIC) for releasing data that exposed the travel history of 15,184,336 myki cards.

The myki dataset contained a record of "touch on" and "touch off" events recorded by the myki system between 1 July 2015 and 30 June 2018, amounting to approximately 1.8 billion events across the 15 million distinct myki cards.

Each event record comprised multiple data points, including date and time, location information, card identifier -- a unique number assigned to each myki card -- and the card type, of which there are 70 spanning student, police, and asylum seeker categories among others.

The data allowed for individuals to be re-identified and their travel activity for the three years to be exposed.

Join Discussion for: Victorian driver licence info to be stored...