Campbell is a journalist for ZDNet, covering technology's impact across the gamut of government, law, and regulation. After completing his Arts and Law degrees, he has pursued a career in journalism following a stint in law at a corporate firm. 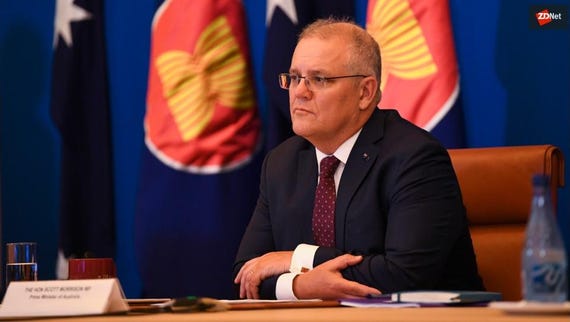 The largest free trade agreement in history was signed over the weekend, with 15 countries in the Asia Pacific region agreeing to be signatories. In total, the agreement will cover 30% of the world's GDP and population to surpass the Trans-Pacific Partnership in scale.

The signatories' leaders agreed to the terms of the Regional Comprehensive Economic Partnership (RCEP) at the Association of South-East Asian Nations (ASEAN) summit in Bangkok last year, with the agreement being officially signed on Sunday. In a joint statement, the signatories said the trade deal would play an important role in plans to recover from the pandemic and help build the region's resilience through an "inclusive and sustainable post-pandemic economic recovery process".

"In light of the adverse impact of the pandemic on our economies, and our people's livelihood and well-being, the signing of the RCEP Agreement demonstrates our strong commitment to supporting economic recovery, inclusive development, job creation, and strengthening regional supply chains," the signatories said in the joint statement.

The RCEP will primarily focus on standardising trade rules across countries in a bid to make it easier for people to do business. For example, the RCEP will enforce a new single set of rules for accessing preferential tariffs in any of the 15 RCEP markets.

In terms of cybersecurity, RCEP countries have committed to collaborating and exchanging information on best practices for dealing with cybersecurity incidents and building the capacity of authorities to respond. When drafting the RCEP, signatory countries said they recognised that cooperation with each other was crucial for preventing cybersecurity attacks.

The RCEP also includes commitments to ensure that signatories do not prevent business data and information from being transferred across borders. In addition, the RCEP includes commitments to prevent countries from imposing measures that require computing facilities to be located within their own territories. These commitments will not apply to the financial services sector, however, and also include exceptions for measures implemented for national security or other public policy reasons.

Signatory countries will also work together on a range of issues, including helping small and medium-sized enterprises overcome obstacles in using electronic commerce, encouraging the development of practices that enhance consumer confidence, and targeted cooperation on research, training, capacity building and technical assistance. To address this, Australia will commit AU$46 million to provide technical assistance and capacity building to help eligible ASEAN countries implement their RCEP commitments.

Other changes include a new scope for trade in services throughout the region including across telecommunications, professional, and financial services; improved mechanisms for tackling non-tariff barriers, including in areas such as customs procedures, quarantine, and technical standards; greater investment certainty for businesses; new rules on ecommerce to make it easier for businesses to trade online; a common set of rules on intellectual property; and agreed rules of origin that are aimed at increasing the competitiveness of signatory markets within regional production chains.

The RCEP, which took eight years to negotiate, was previously intended to include India as well. India pulled out of negotiations last year, however, due to concerns surrounding how the agreement would impact its agricultural sector. Despite India's withdrawal, the joint statement from the signatories said it was welcome to enter into the RCEP agreement.