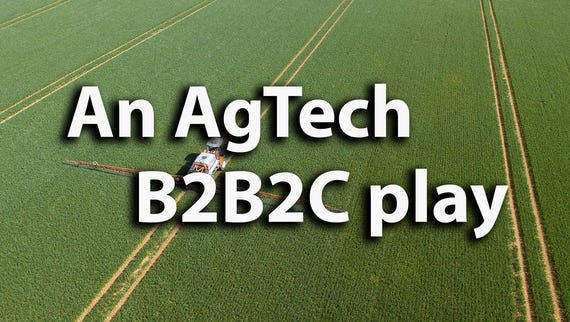 An AgTech B2B2C play: How Bushel is moving the food supply chain into the digital era
Watch Now

When farmers move their food products across the country, it happens pretty efficiently. After decades of fine tuning the supply chain, grain growers and suppliers can quickly get crops like barley or wheat from a farm into your cereal box. If there's a bottleneck anywhere in the process, it's the flow of data -- such as the information farmers and suppliers need to write contracts and get paid.

"In the last 100 years, we have built out the best physical infrastructure in the world when it comes to serving these food products in our own country and exporting them," Jake Joraanstad, CEO and co-founder of the agtech firm Bushel, told ZDNet. "What we haven't done well, though, is the digital infrastructure component. The movement of physical goods usually happens faster than the movement of the information, if you can believe that."

Bushel, based in Fargo, North Dakota, launched its cloud-based platform in 2017 to address those inefficiencies. The company has grown rapidly since then and now has around 200 grain buyers as paying customers. Its user base includes more than 60,000 farmers, who use Bushel-powered products and services to do business with those buyers. After recently making its first acquisition, the company now has around 100,000 farms that touch its products in the US on a monthly basis.

"You cannot, in our opinion, approach it as a disrupter," Joraanstad said. "You can't come in and say, 'I'm going to just change everything all at once.' You're going to get a ton of resistance because that's scary, and it probably won't work the way that you'd like it to."

"You might think a farmer gets home and works on the computer, but this doesn't really happen. They're doing their businesses on their phone," he said. "It's not an environment where you go and sit down. Imagine being a farmer, and you're combining in the fall, you're planting in the spring, you're fixing vehicles, you're running the trucks to town -- nowhere in there are you sitting in front of a computer. And so the idea that all farmers aren't on smartphones or mobile devices is false, and the analytics prove that. Eighty to 90 percent of our usage is on mobile across the whole platform, so it's not even close. So we've learned through analytics that approaching our tool with mobile being the fully-featured tool is actually more important."

After growing the business and gaining access to more data, Bushel also plans to use analytics to serve the industry in new ways.

Currently, farmers rely on reports from the US Agriculture Department (USDA) that help them assess the state of the grain market -- for instance, whether there's enough corn being produced for the ethanol market or for animal feed. However, those reports are typically produced on a quarterly basis and rely on traditional information-gathering techniques like surveys.

Now that Bushel has information about around 40 percent of the grain produced in the US, it can start offering more accurate, real-time insights.

"We have an understanding of how grain's flowing, where the inefficiencies and efficiencies are, why things are happening the way they are," Joraanstad said. "We don't sell data of our customers, but we can help them understand more about the global picture, the farther along we get."

Watch ZDNet's full interview with Joraanstad in the video above.

Join Discussion for: A lesson from AgTech: How Bushel is digitizing...